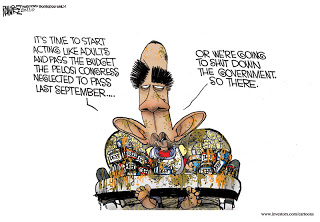 It’s tedious to listen to the doublespeak coming from the Democrats and their stooges in the mainstream media. Or am I the only one? There is not one whisper about the Democrats failure to formulate a budget last year, but endless howling over some very miniscule cuts to the budget that the Democrats want to cling to.
Obama’s own debt reduction committee made draconian recommendations — which he’s forgotten about. The federal government is spinning the inflation we’re all feeling, and telling us over and over again, “THERE IS NO INFLATION” in the hopes that if they tell us that enough, we’ll believe it. They consider it politically viable to do that, to oppose budget reductions and to put off the inevitable crash until we hit the wall. 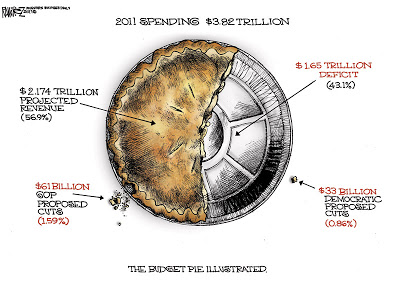 Our national sense of greed and entitlement will be our undoing. And I wonder when enough is enough?