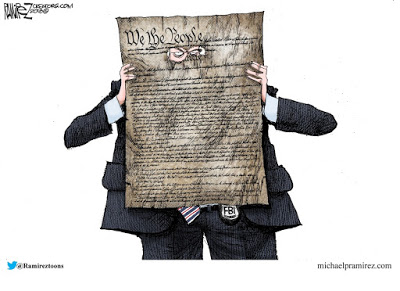 Most people who have been put in the position to work with the FBI found them to be a serious challenge to deal with as an organization. There is vast and unrelenting ego that exceeds what one would normally anticipate from highly placed federal bureaucrats.

Disclaimer: I have a friend who worked at the Bureau (and rose to be assistant director over their ‘enterprise crime’ division – essentially organized crime) that I was partnered with for about five years and still trust him with my grandchildren’s lives so my statement is not a blanket statement. 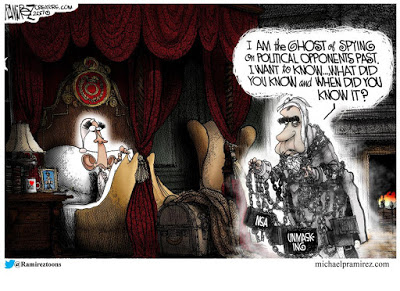 These ongoing revelations about what amounts to treason at the very highest levels of the FBI must be a galling pill for the larger bureau to swallow.  I was in court on Monday (not as a defendant) and ran into a couple FBI Special Agents who know me and they ducked their heads and said, “Ok, LL, have at it.” I went easy on them telling them that “Famous-But-Incompetent” was something that everyone accepted as a fact, but none of us suspected pervasive treason at the very highest levels of the organization (other than Hansson, a Russian spy who ran FBI Counterintelligence). They agreed. Who would say otherwise? The evidence is clear and convincing and there will be more coming.
I asked, “what about your old boss, Barack?” They shrugged. It’s very likely that Barack was briefed on these operations, that he approved the unmasking of Trump campaign names as part of the fraudulently obtained FISA warrants and collection. You don’t hear much from Barack these days. He’s maintaining a very low profile. Which members of the Obama Administration would rat him out if offered immunity in exchange for testimony? Keep in mind that these are people who would sell their mother’s virtue to the highest bidder.

Since this blog post went live this morning, we have this from the Daily Caller: 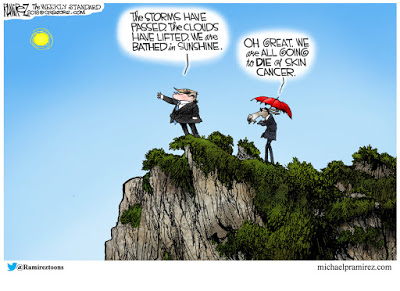 Right, there’s no charm at all. President Trump is optimistic and is drawing his strength from what had once been the Democrat Party’s base. The Democrats have become the party of sour pessimism and that’s a losing combination for politicians.
President Trump doesn’t appeal to many because of his style. Even though I was a Trump supporter from the beginning, I understand. However, he’s playing the Dems like a fiddle. He has identified himself and his Party as the organization that identifies with the American Flag, with economic opportunity, rising wages, full employment and a bright future. While Trump offers America, mom, and apple pie, the Dem’s offer a turd sandwich and remind America that President Trump is a Russian spy.
Turkey vs Kurds

Turkey is embarrassed that the might of a Turkish armored division can’t move a relatively small force of Kurdish infantry out of Afrin. The Turks have reinforced and that makes things look even more silly — but every time they move tanks forward, the Kurds blow them up and post the videos on YouTube. CNN-TURK doesn’t cover the humiliating loss of expensive German made Leopard 2 tanks to the Kurds.
I heard from a source close to the conflict that the Turks also lost some armored personnel carriers in the Afrin area.
The Iraqi Kurdish news service, Rudaw, which is sympathetic to the Syrian Kurds, closely follows the Turkish offensive and the Kurdish resistance. It reported the Turks have made little progress in Afrin canton. It also reported that the Syrian Kurds are rallying to the defense of Manbij, in anticipation of Turkish attacks.
Iran’s Opinion
Iranian Foreign Ministry spokesman Bahram Qassemi called on Turkey to end its offensive in Afrin. He warned the operation would bring back terrorists.

Qassemi said, “The continuation of Turkey’s military operation will facilitate the return of instability and terrorism to Syria.” He also said that Turkey should follow-up all Syria-related developments within the framework of the Astana peace process.

The Iranians have not made many public comments about the Turkish invasion of northern Syria since it began on 20 January. They have their own Kurdish problems. Criticism of Turkey implies no support or sympathy for Syrian Kurds. Iran’s security concern is that Turkey’s troops will create a security vacuum in northern Syria that terrorists will again be able to fill. And that means that the US will not leave the area. As long as the US has an army in the field in Syria and the Levant, Iranian leverage is neutralized.
Qassemi’s warning about the risk that terrorists might return is reasonable because the Turks keep promising to withdraw from Syria when they are finished wiping out the Kurds (down to the last child – they way that they did with the Armenians). That condition presumably means when the security power structure in northern Syria is destroyed.
Qassemi’s also seems to be issuing a more general warning against Turkey’s obvious ploy of using its military forces and its proximity to stake a claim to influence Syrian affairs. Iran understands Turkey is a challenger to the Assad government and to Iran’s position in Syria.
The Iranians know that Syrian Kurdish People’s Protection Units posed no threat to Turkey. The Kurds did not attack Turkey’s territory and had only a few exchanges of gun fire with Turkish Army troops after they illegally entered in northern Syria in Operation Euphrates Shield. Iran knows the Turkish justification for operations in Syria is phony and wants the tripartite Astana process to retrain the Turks.