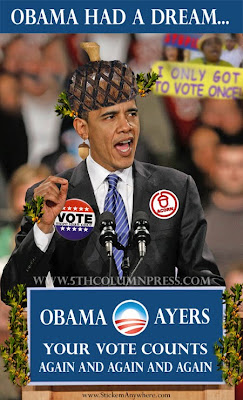 The Nut: Obama and ACORN

The Association of Community Organizers for Reform Now was the organization Obama (Dear Leader) staked his hopes on for a grass roots army that could run his community organizing ground game. Things might not work out quite the way he planned.
It all started circa 1991 when Obama returned to Chicago, having completed his legal education. ACORN noticed Dear Leader when he was organizing on the far south side of Chicago working with the Developing Communities Project (LA Times 3-2-08 – Letta Tayler). The work he did according to the LA Times was to organize demonstrations in the mold of radical groups like ACORN. Madeleine Talbot, the Chicago ACORN leader at the time said that at first they considered Obama a competitor but she was impressed enough with his abilities that she brought him onboard with ACORN as a staff trainer.
“It was Talbot (with Obama by her side), who led Chicago ACORN’s campaign to intimidate banks into making high-risk loans to low credit customers.” (NRO – Kurtz) Talbot’s genius for leading a mob into “direct action” (militant tactics, intimidation, disruption, etc.) was something Obama learned first hand.
By 1992, Obama headed the Chicago Operation for Project Vote! It was an ACORN effort to register voters nationally. (World News Daily) Today, Obama denies ever organizing with ACORN. He applied what is now known as the Cloward-Piven strategy, mobilizing the poor in class warfare against capitalism, who are viewed as oppressors. Cloward-Piven applied the tactics of the revolutionary civil rights movement including inciting urban riots. The strategy transcends politics defined by race and focuses on politics defined by class.
In 1993, Obama was invited to join the board of the Woods Foundation where his long time friend Bill Ayers, a self proclaimed urban terrorist, was serving at the time. Pajamas Media reported that during Obama’s tenure on the board, ACORN received annual grants of up to $45,000 from the Woods Foundation.
World News Daily reported that in 1994, Obama represented ACORN in the Buycks-Roberson vs Citibank Federal Savings Bank case in which ACORN sued Citi to make more loans to marginally qualified (or unqualified) African-American applicants “in a race-neutral way”.
By 1995, Obama worked for ACORN in a major lawsuit where ACORN sued the State of Illinois to implement the “motor voter” law. That same year, Bill Ayers co-founded the Chicago Annenberg Challenge with a $50 million grant program for Chicago Public Schools. Ayers selected Obama to be the first chairman of the Board. (WND- Corsi) Stanley Kurtz (Wall Street Journal) reported that the Annenberg project funneled money through various far left community organizing groups including ACORN.
In 1996, Obama became a member of the New Party, a group that sought to move the Democratic Party to the far left. (WND – citing newspaper evidence) According to Democratic Socialists of America documents, the New Party worked with ACORN to promote its candidates. DSA’s New Ground newsletter stated, “In Chicago, the New Party’s biggest asset and biggest liability is ACORN.”
Between 1997 and 2004, Obama was an Illinois State Senator.

ACORN noticed [Obama] when he was organizing on the far south side of the city with the Developing Communities Project. He was a very good organizer. When he returned from law school, we asked him to help us with a lawsuit to challenge the state of Illinois’ refusal to abide by the National Voting Rights Act, also known as motor voter. .. Obama took the case, known as ACORN vs. Edgar (the name of the Republican governor at the time) and we won. Obama then went on to run a voter registration project with Project VOTE in 1992 that made it possible for Carol Moseley Braun to win the Senate that year. Project VOTE delivered 50,000 newly registered voters in that campaign (ACORN delivered about 5,000 of them).

Since then, we have invited Obama to our leadership training sessions to run the session on power every year, and, as a result, many of our newly developing leaders got to know him before he ever ran for office. Thus, it was natural for many of us to be active volunteers in his first campaign for State Senate and then his failed bid for Congress in 1996. By the time he ran for Senate, we were old friends.

When Obama met with ACORN leaders in November, he reminded them of his history with ACORN and his beginnings in Illinois as a Project Vote organizer, a nonprofit focused on voter rights and education. Senator Obama said, “I come out of a grassroots organizing background. That’s what I did for three and half years before I went to law school. That’s the reason I moved to Chicago was to organize. So this is something that I know personally, the work you do, the importance of it. I’ve been fighting alongside ACORN on issues you care about my entire career. Even before I was an elected official, when I ran Project Vote voter registration drive in Illinois, ACORN was smack dab in the middle of it, and we appreciate your work.”

Obama spoke at the Heartland Democratic Presidential Forum meeting and said “Groups such as ACORN will shape the agenda of my presidency.” (December 1, 2007)
In 2008, ACORN endorsed Obama over his political rival Hillary Clinton. (February 21, 2008 ACORN PAC)
During the presidential campaign of 2008, both Obama and Joe (Slow Joe) Biden insisted they had nothing to do with ACORN since by that time the organization had been the target of voter fraud allegations. However, in August 2008 the Pittsburg Tribune-Review reported that the Obama campaign paid $832,589.29 to ACORN “offshoot” Citizen’s Services for the “get out to vote” projects from February 25 – May 17, 2008.

The newspaper revealed that Obama’s payments to CSI for services were unusual: “For example, CSI received payments of $63,000 and $75,000 for advance work. Excluding the large payments to CSI, the average amount the Obama campaign spent with other organizations was $558.82 per check on more than 1,200 entries classified as advance work.”

In 2008, Anita MonCrief, a woman who worked in the Strategic Writing and Research Department of ACORN Political Operations and its affiliate Project Vote from 2005 through January 2008, said ACORN acted as an unofficial arm of the Democratic Party during the election and used cash operations to keep some financial transactions under wraps.

“It has always been a Democrat operation,” she recently told WND. “They’ve never made any secrets about who they support. Their political action committees are usually set up to support these Democratic candidates.”

She said political action committees support Democrat candidates, and the at the same time voter registration drives were being conducted, the group was putting out propaganda in communities telling people not to vote for Republicans.

According to a Pittsburgh Tribune-Review report, she further told a Pennsylvania court before the election that the Obama camp provided ACORN with a “donor list” that enabled Project Vote to solicit contributions from Obama supporters who had “maxed out” under federal contribution limits but who could surreptitiously give more to Obama’s cause by donating to ACORN and its affiliates.

Obama would like to distance himself from ACORN today, and it’s peculiar that MSNBC hasn’t done any investigative reporting on these widespread allegations… Yes I’m kidding, MSNBC is in Obama’s pocket.
A report from the Committee on Oversight and Government reform stated that ACORN:

“has repeatedly and deliberately engaged in systemic fraud. Both structurally and operationally, ACORN hides behind a paper wall of nonprofit corporate protections to conceal a criminal conspiracy on the part of its directors, to launder federal money in order to pursue a partisan political agenda and to manipulate the American electorate.”

Since 1994, ACORN has received more than $53 million in federal funds, according to the report.

“Under the Obama administration, ACORN stands to receive a whopping $8.5 billion in available stimulus funds. Operationally, ACORN is a shell game played in 120 cities, 43 states and the District of Columbia through a complex structure designed to conceal illegal activities, to use taxpayer and tax-exempt dollars for partisan political purposes, and to distract investigators. Structurally, ACORN is a chess game in which senior management is shielded from accountability by multiple layers of volunteers and compensated employees who serve as pawns to take the fall for every bad act,” the report said.

The report continued, “Lobbying is a substantial part of what ACORN does. It has endorsed Senator Sherrod Brown (D-OH), Representative Albert Wynn (D-MD), and Representative Donna Edwards (D-MD). ACORN keeps donor records from the Clinton, Kerry and Obama campaigns with the intent to engage in prohibited communications. ACORN receives federal funding yet engages in improper lobbying. ACORN and its nonprofit affiliates do not have separate accounts. Neither ACORN nor any of its affiliates have properly reported their political activities to the IRS. These harms fly under the legal radar because the IRS rarely checks for compliance. The ‘no substantial part’ test is rarely enforced and the accounts of ACORN and its affiliates are illegally commingled.”

During the 2008 presidential race, ACORN admitted that more than 400,000 of the 1.3 million voter registrations it claimed to have collected were not valid. There is a criminal investigation underway in 23 States.
Once in office, the Obama Administration selected ACORN to recruit counters for the 2010 US Census.

The Census Bureau severed its ties with ACORN on Sept. 11.The Internal Revenue Service has also indicated that it is conducting a “thorough review” of its agreements with ACORN. According to Bloomberg, ACORN has has helped prepare about 150,000 free tax returns since 2004 for low-income families. Those returns have generated $190 million in tax refunds.

OBAMA = ACORN
There’s no other way to look at it.