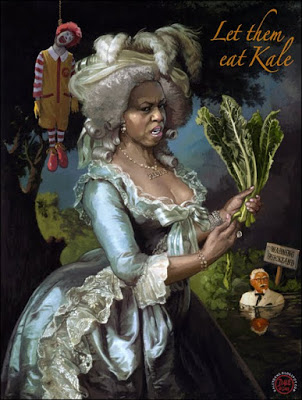 Facebook
Twitter
Pinterest
WhatsApp
Yes, she’s a shrew. Yes, she feels ashamed to be an American — or she did up to the point where she became First Lady, and one would presume that it feels pretty good to be lapping at the federal trough so completely.  But perhaps it’s not all it’s cracked up to be, for like Hillary when she slept in that bed, she’s not calling the shots.

(h/t DALE)
In her efforts to show that she is ‘doing something’ other than taking lavish vacations at public expense,  she has set out to conquer childhood obesity by encouraging government control over fast food (private industry). She does shy away from criticizing big contributors to the Obama campaign like Pepsi (even though KFC is a subsidiary).
The Federal Government under the Obama Administration has made its bones on telling private companies what they can and can’t sell and on what they can and can’t do – and added over 200,000 new federal jobs to try and make the point. There, out front, leading the charge at a waddle is the lady with the mean face, the ample bodied hypocrite, Michelle (Marie) Obama.