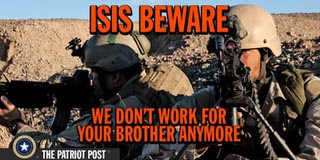 
SANA, the Syrian state news agency, reported that Israeli aircraft attacked a Syrian military position southwest of Damascus airport at dawn on 27 April. One news source said the position was actually a warehouse of Iranian-supplied weapons that was operated by Lebanese Hizballah.
The Russian government protested the attack. However, it’s interesting to note that their anti-aircraft artillery (rocket) did not shoot down the Israeli jets.
Israeli intelligence minister Katz told Army Radio, “I can confirm that the incident in Syria corresponds completely with Israel’s policy to act to prevent Iran’s smuggling of advanced weapons via Syria to Hezbollah in Iran. Naturally, I don’t want to elaborate on this…. The prime minister has said that whenever we receive intelligence that indicated an intention to transfer advanced weapons to Hezbollah, we will act.”
Israel did not directly confirm that it attacked Syria again, but even the indirect confirmation is unusual. Israeli officials seldom make public comments about attacks in Syria.
An unidentified senior Israel Defense Force officer told reporters that the Israel Air Force destroyed some 100 missiles in the air attack on a convoy near Tadmur on 17 March.
After the 17 March attack, the Russians called in the Israeli ambassador to Moscow to protest in person. That action suggested that Russia might use its advanced air defense systems to prevent future Israeli air attacks against weapons shipments for Hizballah. The Israeli attack on the 27th indicates the Russians will not protect Hizballah’s Iranian arms supply line.
The Israeli officials’ greater openness about operations over Syria conveys to the Assad government and to Iran that Israel can and will continue to prevent advanced weapons from reaching Hizballah whenever it detects them. In other words, business as usual.
Meanwhile, the US military is making headway against the Caliphate (ISIS), but you won’t read about every planned move in the New York Times a month in advance.

Mohammedans on the march to Europe (below) in search of a better life. 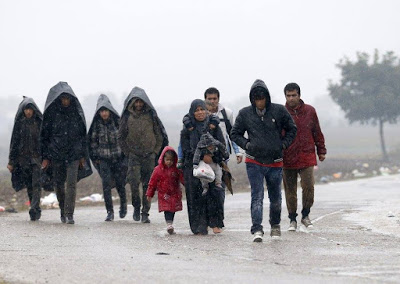 In the photo, there are 7 military age men and 1 woman. The woman has bare feet and she is carrying two of the three children who accompany her. The men all have shoes. None of the men are helping her, because in their savage, barbaric and backward culture the woman receives neither help or respect. In essence, she lives a life of slavery and servitude. If the odds hold true, the lady was likely the subject of genital mutilation as a child, she received no education and she is not allowed to hold a job, open a bank account or drive a car due to the faith-centered norms of her culture.
How do women in the USA react to this? They honor Islam, while wearing pink vagina hats. 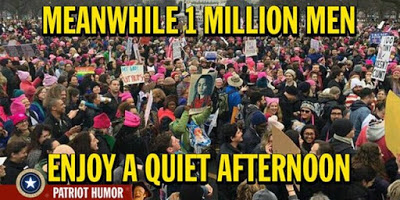 Shamelessly lifted from Diogenes for discussion here
The United States can really be divided up into three types of places. Places where there are no murders, places where there are a few murders, and places where murders are very common. In 2014, the most recent year that a county level breakdown is available, 54% of counties (with 11% of the population) have no murders. 69% of counties have no more than one murder, and about 20% of the population. These counties account for only 4% of all murders in the country. The worst 1% of counties have 19% of the population and 37% of the murders. The worst 5% of counties contain 47% of the population and account for 68% of murders.
This does not represent a gun control problem since the bulk of the 350,000,000 (estimated) firearms owned in America are not concentrated in the same areas where murders are most prolific. Murders are highest where Democrats have unassailable political control. What are we to make of that? I am not going to discuss racial distribution as an overlay to this map because to do so would make me a racist… 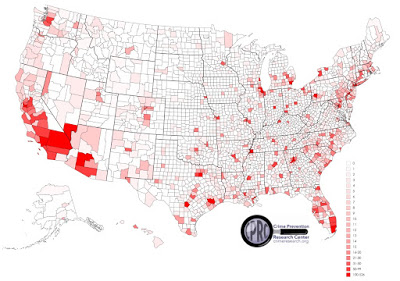