Love on the Rocks? 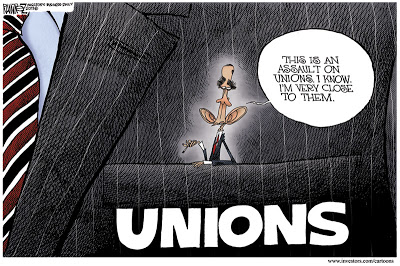 Facebook
Twitter
Pinterest
WhatsApp
Is the liberal love affair with Obama beginning to tremble and crack? Have they tasted a dose of reality? Do they really think that the President of the United States should send his army of political/community organizers to Wisconsin to try and topple a governor who is working to save jobs – including teachers – from lay-off?

No, I’m not suggesting that the SEIU thugs that were bussed in love the source of their funding any less. And, I’m not suggesting that many Wisconsin state workers have the maturity to see the handwriting on the wall.
Governor Scott Walker proposed that state employee wage increases be indexed to the rate of inflation unless approved in a voter referendum. Public employees could opt out of paying union dues after current contracts expire, with dues no longer collected automatically. (the unions tremble) State workers will have to increase contributions to their pensions to 5.8 percent of salary, and double contributions to health insurance premiums to 12.6 percent of salary. The plan calls for raising appropriations for prisons and the Medicaid program, which is underfunded by $153 million, while making changes to the health insurance program for the poor. It also calls for selling the state’s heating plants.

Iowa Democrats are trying to block similar efforts there where their state faces equally ominous economic forecasts. Ohio is following Wisconsin in an effort to curb run-away public employee unions. The word that keeps coming up is UNSUSTAINABLE. Crazed liberal whack jobs rant but there are a lot of liberals who see the handwriting on the wall, and they will vote too. Bringing balance to a system that has tipped too far is essential to saving the states and saving the nation.
Nobody expects Obama (deeply into the pockets of the unions) to do anything but be unpresidential (what’s new?).
Wisconsin joins many states in the union who are running vast deficits and constitutional mandates to balance their budgets. The unions may howl, but ultimately voters from across the spectrum will decide the fate of government union workers and of the unions themselves. The public will have to increase taxes to unheard of levels or to reduce COSTS. It’s not rocket science.