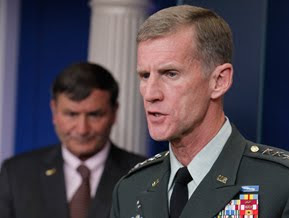 I do not purport to understand General Stanley McCrystal, US Army as we have never met. However, since he occupies a critical position in the US Military and is one of our most competent generals now in the field, I believe it’s time that we take a look at the current conflict between General McCrystal and barack hussein obama (and the obama regime).

General McCrystal is known as a man not given to foolish blanishments or political banter. He is plainly spoken and, he’s obviously frustrated with the unqualified buffoons who are giving him orders from the White House. He gave an interview to Rolling Stone Magazine, knowing that they’d run with it. Other parts of the mainstream/state run media might not have. So, one may say that McCrystal chose well, when he picked Rolling Stone.

“We ran everything by them in the fact checking process as we always do,” the Rolling Stone editor said. “They had a sense of what was coming and it was all on the record and they spent a lot of time with our reporter so I think they knew that they had said it.”

The people who run the United States are not qualified to run a doughnut shop (not McCrystal’s words, but mine). McCrystal and his staff are some of the best professional officers our military has ever produced. To put them under the aegis of Vice President Joe (Slow Joe) Biden, National Security Advisor Jim (Clown) Jones and others must be something that they’re simply fed up with. 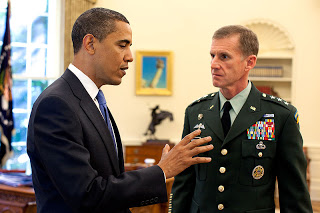 After the interview was published, and McCrystal got his message out, he apologized:

“I extend my sincerest apology for this profile. It was a mistake reflecting poor judgment and should never have happened. Throughout my career, I have lived by the principles of personal honor and professional integrity. What is reflected in this article falls far short of that standard. I have enormous respect and admiration for President Obama and his national security team, and for the civilian leaders and troops fighting this war and I remain committed to ensuring its successful outcome.” —General Stanley McCrystal, 6/22/2010

The magazine portrays General McCrystal as standing alone in fighting the war against the barack hussein obama regime, who is not serious about waging a war in Afghanistan. The Rolling Stone piece claims McChrystal has seized control of the war “by never taking his eye off the real enemy: The wimps in the White House.”
Asked by the Rolling Stone reporter about what he now feels of the war strategy advocated by Biden last fall – fewer troops, more drone attacks – McChrystal and his aides reportedly attempted to come up with a good one-liner to dismiss the question. “Are you asking about Vice President Biden?” McChrystal reportedly joked. “Who’s that?” “Biden?” one aide was quoted as saying. “Did you say: Bite me?”
Will barack hussein obama sack General Stanley McCrystal when they meet tomorrow? I doubt it. Unless the teleprompter tells obama that he must. I expect that obama may offer the General advice from his years of community organizing on the mean streets of Chicago, and will then send him on his way.