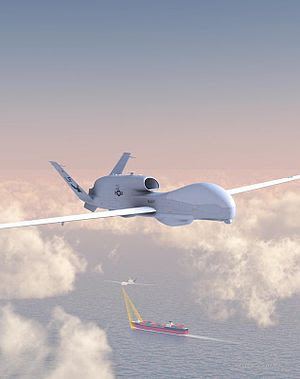 The MQ-4C Triton performed its first flight on 22 May 2013 from an airfield at Palmdale, California. The flight lasted 1 hour 20 minutes and the aircraft reached 20,000 ft. This is a really big, purpose built, maritime surveillance platform that can remain aloft for an extended period of time.
Those readers (such as Old NFO) who are familiar with the challenges of maritime surveillance know that it’s no high school prom. You fly or you sink. Drones are getting expensive and very complicated. The Triton is both. It is the first drone aircraft with a ‘sense and avoid’ system, it is fitted with deicing and lightning protection systems and it will fly missions of up to (and possibly exceed) twenty-four hours at high altitude.
The US Navy is buying 117 Boeing P-8 Poseidon  maritime surveillance aircraft (a 737 with a lot of gear onboard) to replace the propellor driven P-3 Orion. The P-8’s will be augmented by the Triton drones.

The balance between manned surveillance aircraft (much larger, more expensive and more capable than the drones) and unmanned drones is one that both the US and its allies are trying to balance. Since 80% of the world’s commerce moves by ocean, the concept of active maritime surveillance has never been more important than it is today.

The P-8 Poseidon has a extensive weapons load out options including the AGM-84H/K SLAM-ER (Standoff Land Attack Missile Expanded Response), mines, torpedoes, and a nearly inexhaustible supply of sonobuoys.