The Man Behind the Mask 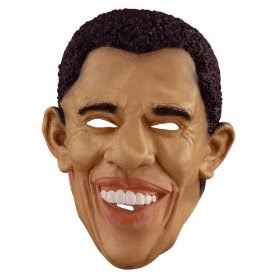 Who is the man behind the mask?
There are people who believe that if you use Barack HUSSEIN Obama’s middle name, that you are being a racist. I don’t know how they figure that, but to be fair to all and infinitely politically correct, I usually simply refer to him as Dear Leader.
There are people who believe that any opposition to the policies he puts forward or any concerns about his utopian socialist agenda are clear signs of racism.
For the record, I am deeply saddened that the first half black president of the United States turned out to be such a poor choice for the job. Don’t blame me, I didn’t vote for him. However, my vote was NOT based on racial interests. Quite frankly, I thought John McCain was just about as bad of a choice for president as Dear Leader. There wasn’t much of a choice in the last election.
Let’s run down who the Man Behind the Mask has shown himself to be to date:
The dossier could go on and on, but we’re 8 months into this presidency and by the end of his four year term, it will be MUCH longer than it is presently.
Who is the man behind the mask? It’s not a pretty picture.
IF I TOLD YOU on September 12, 2001 that the next President of the United States would be a pseudo Marxist, utopian socialist, a closet Muslim who would bow (and scrape) to the Saudi King — keeping in mind that Saudis flew the aircraft into the WTC — who would be working hard to socialize all key institutions in America and that his name would be Barack Hussein Obama (Dear Leader). Further that he would change the nature of our remembrance of 9/11 to a day honoring National Service – which means “community organizing” to Dear Leader?
WHAT WOULD YOU HAVE BET ME that I was wrong?
And depending on how you answer that question, what does that say for America, for the majority of Americans?
Understanding the new ObamaNation that we are faced with today requires that we examine ourselves as Americans first. What do we hold most precious? What are our personal values and principles? And who is this man, behind the mask, who sits as our leader and as such the leader of the free world?