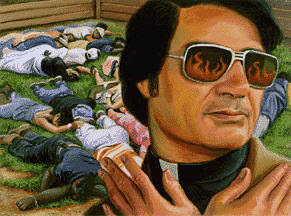 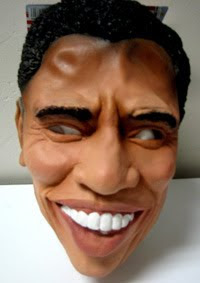 Rev. Jim Jones
Dear Leader – Masked
I hate to shock those who follow this blog, but I have friends who are liberals. We simply refuse to discuss politics together. One dear friend (who voted for Dear Leader) occasionally posts here as “anonymous” and now admits the mistake. America is waking up to the charlatan who-would-be-king. We screwed up big time. Now we need to set things right. Anyone can be duped by a charismatic character with a clever schtick and Dear Leader is a snake oil salesman of some renown. If Dear Leader had been all white instead of half white, he would have been Jim Jones, founder and prophet of Jonestown – or a cult something like that one. The liberals drank deeply from the trough of Kool Aid that Dear Leader gave them. Their egos and their honor were attached to a charlatan and they’re having some difficulty separating themselves from him.
Again, anybody can be duped. Here is a very small list of some of the LIES Dear Leader told them (note I’m not getting into Health Care, Cap and Trade, the GIVE Act, etc.)
Religion: Dear Leader portrayed himself as a Christian.
Black Liberation Theology has about as much to do with Christianity as an ox has to do with a gazelle. In truth, he appears to be a closet Muslim. I have nothing against Islam or Muslims. Nothing at all. I have a problem with a man who works hard to hide his beliefs.
Philosophy: Dear Leader portrayed himself as a populist a bit left of center.
In truth he’s a utopian socialist whose only friends are communists and unrepentant terrorists who are even more radical than he appears to be. His agenda is to rip the nation apart, redistribute wealth and create a state that is somewhere between North Korea and Cuba in its orientation. I have a problem with a man who works that hard to hide his beliefs.
Transparency: Dear Leader told America his administration would be transparent.
The hidden agendas of ACORN, the hidden alliances with radical labor organizations, the Black Panther Party, the Apollo Group who wrote his “stimulus package”, and others have been uncovered by a handful of Patriots. They certainly were not disclosed by Dear Leader as part of his plan for America. I have a problem with a man who works that hard to hide his designs.
Racism: Dear Leader portrays himself as the man of mixed race to unite both black and white.
His Black Theology Religion is a cult of racial hatred. Rev. Wright is an unabashed racist as are ALL of Dear Leader’s friends. Though I don’t know Dear Leader personally, from what I have seen, he appears to be ashamed of being half-white. It’s odd when you consider that the black side of the family completely ignored him and he was nurtured and raised by the white. I think a man who harbors racial hatred should not be President of a country of many races.
National Protection: Dear Leader portrays himself as a man deeply concerned with our national defense.
Corruption: Dear Leader and his band of misfits which include Nancy Pelosi and Harry Reid painted themselves as “above corruption”.