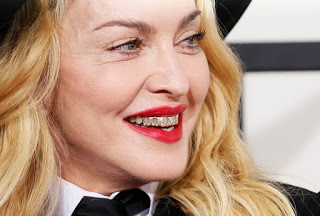 “And I’m good,” boasted the 58-year-old Queen of Pop, during her opening act for comedian Amy Schumer.

“I am not a douche, and I am not a tool. I take my time,” boasted the Like a Virgin singer. “I maintain eye contact, and I do swallow.”

Keep in mind that it’s an aging flying monkey with a wicked pecker wrecker on her teeth who is offering to blow for a vote, not Hillary herself, who, it is said, prefers the female gender. I wonder how many votes that Madonna will earn for Hillary?