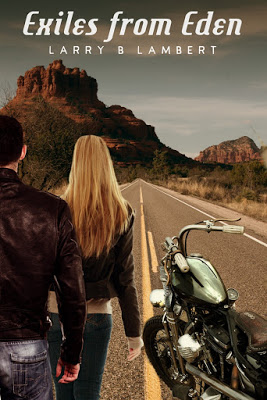 Facebook
Twitter
Pinterest
WhatsApp
Exiles from Eden is now live on Kindle, priced at $4.99.
It is a departure for me in writing because it’s an action/adventure love story that takes a very different turn from other stories with love themes such as “The Old Whore” (also available on Kindle). If you read my blog, you might also enjoy my fictional effort. The second book in the Exiles series is in production. Hopefully you will like #1 enough to buy #2.
The 93,000 word novel, set in the early 1990’s, is told from different first person perspectives. In a sense, it is a coming of age story wherein the principal characters, Sean O’Bryan and Jessica Baker are joined in a backdrop of intrigue as they simply attempt to live life.

Sean, on a journey to be his own man, joins Satan’s Legion, a motorcycle gang in Southern California. Jessica, adrift as a stranger in a strange land, joins him in the gang as they try to work out who they are as individuals and as a couple.
As their need to join the criminal world completely becomes more pressing, for Sean and Jess, they don’t realize that what they say is being recorded and what they plan to do is part of a larger net that is dropping over them. While justice is about to be served, compassion by the undercover police officer in their midst sets the wheels in motion for their escape.
Jessica, wanted in England for a crime that she did not fully commit and their involvement with Satan’s Legion culminates in a flight to the Boneyard, in the most unlikely place.
Characters
Sean O’Bryan was given the choice after stealing a motorcycle as a juvenile. Go to war or go to jail. Now, a twenty-three year old US Marine Corp veteran of the First Gulf War, spent inventorying boxes, bullets and band-aids, wants to get out from under long shadow that his family casts.
Jessica Anne Baker, twenty, is bored with her life and steals a £1500.00 overage from the nightclub where she works the counter. She takes that money and her meager savings, and flies to Hollywood, hoping to make a new life in the city of dreams. The club reports that she stole £111,000.00, reports the theft to the police and makes a claim against insurance, hoping that she’ll never come home.
Mark Peterson/Andrew Boyce is an undercover police officer in Satan’s Legion and meets Sean and Jessica when they arrange to join. Carefully crafting his case, he develops a set of circumstances where they arrange a cargo hijacking. In the end he turns out to be less of an enemy of the couple than one might expect.
Matthew (Fish) Fisher is a pilot for North American Air Transport, flying from Davis-Monthan Air Force Base in Tucson, Arizona. Fish becomes their mentor and guide into a shadowy world of unmentioned cargo and veiled intrigue as Jess and Sean run from and toward justice.