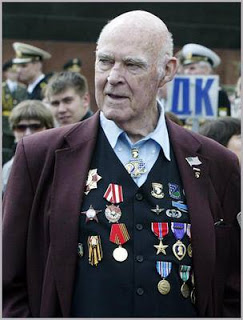 While I’m in the air on my way to Hawaii, I wanted to share this with you. Courage such as this needs to be recalled from time to time, because such men did exist.
“Jumpin’ Joe” Beyrle (right) was an American paratrooper who also served in the Soviet Red Army. He might qualify as one of many ultimate ‘wild men‘ in US military’s history.
After being assigned to OSS and being captured during clandestine missions with the French resistance, he made seven escape attempts and was sent to an Eastern camp, from which he also escaped.
Jumpin’ Joe managed to link up with Captain Aleksandra Samusenko’s 1st Battalion of the 1st Tank Guards (read more about her here), greeting the famous female commander with a pack of Lucky Strikes that he received in the camp as part of his Red Cross Package before his escape.

He was allowed to serve in the battalion as a machine-gunner aboard a T-34 until he was injured in a dive-bombing run and evacuated to Moscow. There, he was awarded medals for heroism by Marshal Georgy Zhukov and discovered that he was listed as KIA by the United States Army.

His uniform had been used by a German infiltration unit months previously, the wearer killed by a landmine and rendered unidentifiable. He returned home in April of 1945, and in 1994 was decorated by both Bill Clinton and Boris Yeltsin at the 50th D-Day anniversary ceremony.