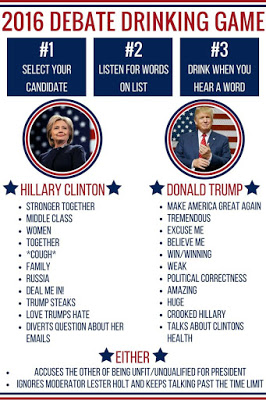 Facebook
Twitter
Pinterest
WhatsApp
I want to posit a serious question to all of you who read this blog:
Given the myriad scandals involving the selection of candidates including “super delegates” and back room state nominations (as opposed to a public vote) for a candidate – moving on to the tens of thousands of e-mails that came forward through WikiLeaks and culminating with the veritas videos – Is corruption so endemic and so accepted that we can no longer go through a fair nominating process in America for each of the major parties and an honest election for president?

I had lunch with a long time friend today. Former investigator for the US Senate, worked in key roles at CIA and Treasury, also a friend of blogger WoFat. The discussion turned serious when he said that the system was so broken – so fractured – so corrupt and was so accepting of corruption as a normal political practice, that the foundation of the Republic was gone. The remaining veneer is so thin and transparent and the Potemkin Village is evident to all but the most deluded and ignorant souls.  Connivance gave Hillary Clinton the Dem nomination over Bernie Sanders, and it has served her in the general election as well. Felonies were excused by the Obama Administration and corrupt DOJ officials to allow Clinton to continue in her race for the White House.
What sort of credibility will the next president have, no matter who wins. And what of 2020? What will that and future elections look like? Is the 2016 election cycle to be the gold standard going forward?
The Debate: Given what we know of Hillary’s past, is A SINGLE WORD that she says, “credible”? The answer is that nobody knows because she is a pathological liar. The evidence of that is overwhelming and incontrovertible. Should she be allowed to debate, given that situation? I guess so, but there should be a disclaimer at the beginning and at the end. Having said that, this third debate was Trump’s strongest showing so far. The Democrats were upset that Trump said that he may not abide by the results of the election because he believes that it is being rigged through felonious means — and there’s video proof of that.

The Hollowing of America: The military needs a jumpstart, the economy does not grow (see gun decking, below) even though Barack and Hillary would have you believe that it is. We have exported good manufacturing jobs and Obamacare has driven up the cost of healthcare to an obscene level. If I sound as if I’m echoing Trump, I’m not. The globalists have done this and we are paying the butcher’s bill on it. The British saw their world being hollowed out and voted for BREXIT, in the hope of regaining national sovereignty and say in their own future. America is in a different place but the issues are remarkably similar.

Conspiracy Theory: Who pulls Barack’s strings? (don’t even bother to suggest that Barack is his own man) Who pulls Hillary’s strings? (again, it’s not Hillary). The best answer that I can give is that I’m not sure. Soros, and others clearly have serious influence, but there are others.
Trump is the fly in the ointment (they wanted it to be Jeb! – stupid, compliant and complicit), and he’s not reading from the same script that the career politicians read from.
Gundecking: Old NFO will know what I mean when I say that the way the nation collects statistics is best defined as “Gundecking”. It’s a Navy term.

Gundecking Defined: to fake or falsify especially by writing up (as a series of official reports) as if meeting requirements but actually without having carried out the required procedures

We see statistics bent to the point of unbelievability in areas such as what counts as “unemployed” and “full employment”. A little honesty would be refreshing. The same thing is true with how the Obama regime counts “deportations”. When every measurement is twisted either by lawyers concocting ‘definitions’ or by outright deceit, the way we look at success and failure is also skewed. There is an old axiom: Figures lie and liars figure. That’s not new to the ObamaNation, but they have taken it to a whole new level where credibility is even strained at time to the news media, who is firmly in their pocket and under control.
It all speaks to credibility.

Back to that first question that I asked you, Is corruption so endemic and so accepted that we can no longer go through a fair nominating process in America for each of the major parties and an honest election for president?