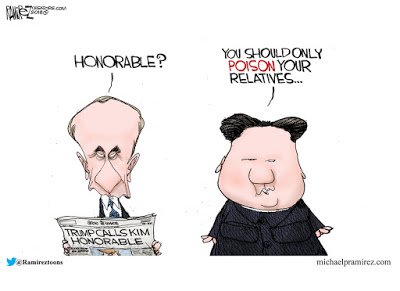 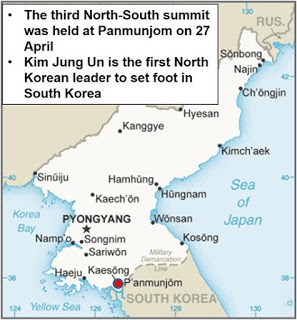 President Trump said that during his administration, America may get tired of winning. The US strategic posture against North Korea seems to be working and we may see peace in Korea – something that Barack never thought would happen. However, a timid, feckless president doesn’t inspire respect (unless you’re the corrupt, lying, elite mainstream media).

(Fox News) North Korean leader Kim Jong Un made history Friday when he crossed into South Korea to meet with President Moon Jae-in. But not far behind him was a portable toilet, according to a report.

Lee Yun-keol, a former member of the North Korean Guard Command who in 2005 left for South Korea, told the Washington Post that the toilet is meant to keep certain information about the leader private.

“The leader’s excretions contain information about his health status, so they can’t be left behind,” he told the paper. The report said that he uses the private toilet during international trips and, at times, even domestic events.

The portable potty is shrouded in secrecy. The DailyNK reported in 2015 that it is transported in the leader’s convoy.

“There are multiple vehicles within the convoy so that people cannot tell which one he is in, and there is a separate car that acts as his restroom,” an unnamed source told the website.

The US and China need to insure that the deal is fair and that inspection is thorough – for everyone’s benefit. North Korea needs to de-mobilize much of its military in addition to de-nuclearizing. But the steps that we’re seeing are clearly historic. And while the leaders are meeting in South Korea, the threat of war on the peninsula dropped to nearly zero for the first time in generations.  The deed is not done, but the steps being taken to change politics as usual are profound.

Indian Prime Minister Modi arrived in Wuhan on the 27th in preparation for an “informal summit” with Chinese President Xi Jinping. The summit meetings will be held on 27 and 28 April.
Modi is the first head of government that President Xi has hosted in a venue outside Beijing. The leaders hope to establish rapport that will help build trust.
India and China came close to armed clashes last year over a Chinese border deployment near Bhutan. China claims sovereignty to the Indian state of Arunachal Pradesh. Both have steadily built up forces along their common border.
India’s sympathy for Tibetans and the Dalai Lama is a longstanding irritant to China. China’s Belt and Road Initiative beats almost every similar Indian initiative in the Indian Ocean region. Chinese naval ships poach in waters that India considers under its protection.
China has close ties with every nation that borders India. A serious irritant is that a section of the China-Pakistan Economic Corridor transits territory that India claims as part of Kashmir. China also has built its first overseas military base at Djibouti.
Indian forces train with South Korea, Japan and the US. India follows a “Look East” strategy for economic and strategic cooperation with Southeast Asian states. India also continues to develop long range weapons systems that exceed the military requirements of any war with Pakistan.
The two leaders hope to update a “modus vivendi”, a framework for settling disputes without using force, which Prime Minister Rajiv Gandhi negotiated in 1988. Since September, teams of negotiators have been working on a framework for the future.
Historically, India and China have not been competitors. They have become so because of the effects of modernity, the endless needs of their large populations and greater global connectivity that has enabled competition outside natural market areas.
Nevertheless, both nations need to cooperate to maintain regional stability, which is essential to achieving their development goals. They also need to cooperate in a mechanism for containing and suppressing Islamic extremism.
Pakistani leaders are concerned about any Chinese outreach to India. China sent high-level diplomats to reassure the Pakistanis. The Pakistanis do not yet appreciate that China is cultivating all the states in south and central Asia, including Afghanistan.
In terms of long-term, world impact, this informal summit is significant because it affects the destiny of more than one-third of the world’s population. A Chinese journalist said that Xi and Modi are creating the Century of Asia.