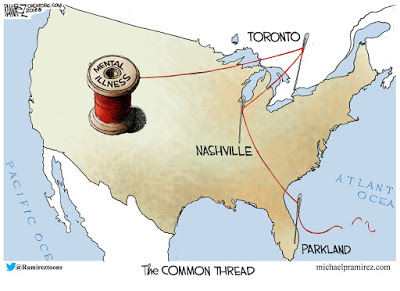 And when you’re crazy as a March Hare, maybe you need some sort of mandatory institutional treatment rather than being set free to do harm?
I’m not an expert on mental illness except that I know that it takes different forms. Some are more severe than others. Yet, it’s still one of those things that people don’t like to talk about  – or more importantly – do anything about. A lot of the homeless people in America are simply nuts and nobody wants to deal with that institutionally so they wander the streets. Some are violent. Some are not.  If they get a hold of a gun or a knife, the guns or knives are blamed. Blaming a crazy person for being crazy is not politically correct.

Which begs the question of whether or not the mainstream media and the liberal/progressives are all nuts themselves for blaming the problem on the instrument rather than on the person using it. According to THEIR logic, cars, and not people, should receive traffic citations for unlawful conduct.

The Most Popular Virtual Mirage Post of All Time

It’s a breach of contract case, where a German court was forced to decide a matter where a man hired a neighbor to impregnate his wife and paid for the service. It was only later discovered that the man hired was sterile. The facts are at the link – you decide. Honest effort?

As this blog approaches two million hits, I’m going to pull popular posts from the past and reference them. Do I win a toaster or something when I hit two million? Or is it three?

Some of you have written to inquire about the progress of the book about pirates that I’m writing – Quidley’s Secret is the present working title. I’m somewhere near 1/3 of the way through. To refresh your memories, it’s essentially a story that originates with my own family history research, and involves piracy in the Carolinas in the late 1600’s and Edward Teach (Blackbeard-the-Pirate) as a young boy. Patrick Quidley, the pirate referenced in the prologue, was hung by the British Admiralty Court on March 5, 1694 for piracy. The larger story is the subject of the book, which is historical fiction.