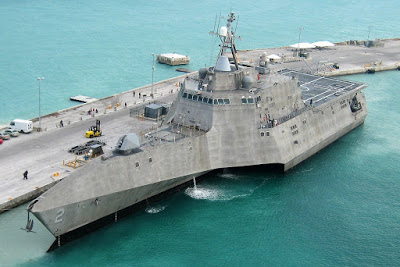 Facebook
Twitter
Pinterest
WhatsApp
Those of you who know me, or who have followed this blog, will understand that I’ve been frustrated as an armchair sailor these days to see the US Navy build worthless Littoral Combat Ships.  Both the USS Independence and USS Freedom (pictured below) are different hull designs of the same class of ship.
The original order called for 52 hulls, but now (mercifully) it seems that the number will be capped at 38.
Q – Can they defend themselves against an air or naval threat? – No, not really. They’re sitting ducks.
Q – What is their operational range unrefueled? – They are essentially tied to tankers or shore bases because they drink navy distillate as if there is no tomorrow in any sea state.
Q – The Navy says that they are multi-mission ships. – Yes, that’s what the navy says. They’re next to worthless as SPECOPS platforms because they are acoustically very loud.
Q – The Navy says they will save money because they have small crews. A small crew is great if you are not worried about working them 24/7. In combat, it is proven that saving a damaged ship is largely a function of manpower, not computers.
My solution – ship all of them to the Mediterranean where they can form NATO support flotillas in Rota, Spain and Naples, Italy. Both bases are nice duty and they can swarm here or there on various exercises until their service lives end. In the event of real hostilities, they can be used as cannon fodder (targets) or bullet sponges, depending on how you want to put it. Mount a radar reflector on each them so that the enemy things that they’re engaging much more valuable ships with their missiles. The valuable ships can track the point of origin of sub launched missiles and engage the sub or other enemy vessel.
Maybe they can be sent out to engage Somali Pirates in open boats? They’d need a tanker with them to keep them fueled, because they drink copious amounts, but they’d work against that sort of low tech opponent.