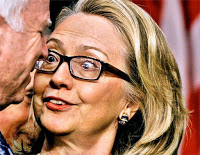 Facebook
Twitter
Pinterest
WhatsApp
Political Kabuki Theater
Crooked Hillary made headlines Monday when she told a local New York news channel that she would not run for president in 2020.

“I’m not running, but I’m going to keep on working and speaking and standing up for what I believe,” the former presidential nominee told News 12 Westchester. She insisted that she would remain relevant and has no plans of “going anywhere.”

Then President Trump goaded her into changing her position (her first reset of the 2020 campaign season) by mocking her.
Now the aging, former candidate, may be running again, creating more havoc with the vast pool of political wanna-be’s who are lining up to compete for the Democrat Party’s nomination. She has told her team she is waiting  to see the Mueller report. I don’t know why she doesn’t just call Mueller. The Deep State owns him don’t they?
It’s clearly in President Trump’s best interest in keeping Hillary in the mix. She failed to win election twice (losing the nomination to Barack and then an election to President Trump). If she ran again, health continuing to decline, we’d see a lot more incidents when they had to rush her to a private hospital room to pump her full of drugs (Weekend at Bernie’s scenario). And YOU KNOW the other Democrat wanna-be’s would savage her during the nomination process. I’d need to lay in a whole case of popcorn and one of those four-packs of butter from Costco.
The Schumer – Pelosi Diet

The idea came to me when I cracked open a box of Honey Nut Cherrios this morning only to realize that I bought a box with Ellen’s face (from the talk show) on the exterior. I was in a hurry, filling loading the cart from the list for the officer’s mess at the White Wolf Mine and I just grabbed the box off the store shelf without realizing. So I threw the box away and kept the cereal in that bag they come in. Who could digest breakfast with the progressive comedian looking back at you?

Then I thought, “I need refrigerator magnets with Nasty Pelosi and Cryin’ Chuck Schumer’s faces on them!” Everyone needs to keep fit and avoiding the refrigerator is the first step. Having those two ugly mugs staring back at me would divert me from wanting to eat. You don’t have to limit it to Nasty and Cryin’ Chuck. Hillary’s face (see above) would make a train take a dirt road.  As the political season gets going in 2000 I could add Poke-a-haunt-us Warren, Spartacus Booker, Slattern Harris and the whole crowd of misfits. I’d end up gaunt, and starving, and I think that’s the goal of a diet.