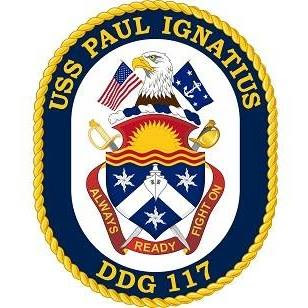 Ingalls Shipbuilding claims that DDG 117 is tied up at the dock in Pascagoula, Mississippi. When I checked with them, they suggested that my eyes are lying. Make of that what you will. Maybe I’m crazy.

The DDG 117 sailed past the O-Club at Joint Base Pearl Harbor at about 10:00 HRS in broad daylight. I know because I was there finishing my eggs Benedict and OJ, and had just cracked the computer open to try and get some work done.

The O-Club sits right on the channel (and it’s narrow) so ships tower over you as they pass through. The USS Paul Ignatius is the newest of the DDG 51 Class of destroyers and was scheduled to be commissioned in 2018. My sense is that the impending war with North Korea and the unfortunate ramming of the USS John S. McCain and the USS Fitzgerald, which took them out of the fight, caused the navy to hurry the Iggy’s commissioning.
USS Paul Ignatius is the 2nd of 8 planned Flight IIA “technology insertion” ships, which will contain elements of the Flight III ships projected to begin with DDG-124. That means that she can shoot down Nork missiles in flight. I would have brought her into Pearl under cover of darkness if I wanted to keep things under wraps and would have painted other hull numbers on her. So maybe the navy doesn’t care THAT much?
Grandsons are present, so I took them to the Arizona Memorial in the afternoon and then we went by the Iggy’s berth to check out the newest DDG…except she’s in in Mississippi??? Really?
My sense of things is that Iggy is picking up the rest of her crew at Pearl Harbor. There weren’t many sailors manning the rails when she sailed in, which means that most of them were standing watch.
On the bad side, I saw some of the most slovenly looking sailors hanging around on Joint Base Pearl Harbor that I’ve ever seen. Inner city types with ratty beards, wearing filthy BDU’s and not wearing covers. In another day and time, I’d see they faced a captain’s mast, but times have changed and I’m just a(nother) worthless civilian…almost a feather merchant but not quite.

(Somebody needs to Article 15 those turds to close confinement on bread and water – you can still do that in the Navy. But there may be an inner city person exception for the sake of diversity??)