Is Obama re-writing his speech? 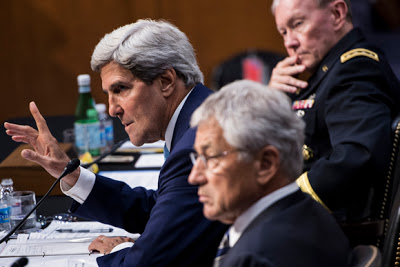 In response to a reporter’s question Secretary of State John Kerry seemed to imply that if Assad gave up his chemical weapons it would forestall a war between the US and Syria.

“He could turn over every single bit of his chemical weapons to the international community in the next week. Turn it over, all of it, without delay and allow a full and total accounting,” Kerry told reporters during a press conference in London with his British counterpart.

The State Department later clarified Kerry’s statement back, calling it an off-hand “rhetorical argument.” The US wants to have a war to distract the public from the disastrous Obama Administration and its seemingly never-ending scandals.

“His point was that this brutal dictator with a history of playing fast and loose with the facts cannot be trusted to turn over chemical weapons. Otherwise, he would have done so long ago. That’s why the world faces this moment,” Kerry’s spokeswoman Jen Psaki said in a statement.

(Russia Today) The Russians called Secretary Kerry’s bluff and deftly pulled his pants down around his ankles.

(Russia Today – above) “We are calling on the Syrian authorities not only agree on putting chemical weapons storages under international control, but also for its further destruction and then joining the Organization for the Prohibition of Chemical Weapons,”Lavrov said. “We have passed our offer to [Syrian Foreign Minister] Walid al-Muallem and hope to receive a fast and positive answer,” he added.

The Syrians thought that it was a splendid idea and said:

(CNN) Syria “welcomes” Russia’s proposal for President Bashar al-Assad’s regime to put its chemical weapons under international control, Syrian Foreign Minister Walid Moallem told reporters in Moscow on Monday. While this was not an agreement it was certainly positive, and the fact that the discussion is taking place between Syria and Russia makes the possibility of an agreement even more likely. But no agreement has happened yet. I cannot however, believe that Obama would be crazy enough to turn down a deal like this if it is offered. It gives him the out to avoid the war that only those in his administration want.

President Obama was about to give a speech to America, stressing the need for immediate war against Syria in order to seize Bashir al-Assad’s chemical weapons stores. Now, we hear that Assad is happy to put his chemical weapons under control of international observers and work toward having them destroyed.
Will Obama still push for a war?

Or maybe it was never about chemical weapons in the first place?

(CNN) But speaking at a news conference with British Foreign Secretary William Hague, Kerry described that as an impossible scenario.

“He isn’t about to do it and it can’t be done obviously,” Kerry said.

The State Department later sought to clarify Kerry’s comment as a “rhetorical argument” and one U.S. official called it a “major goof” and that America’s top diplomat “clearly went off script.”