Is the End Near? (The Big Crunch) 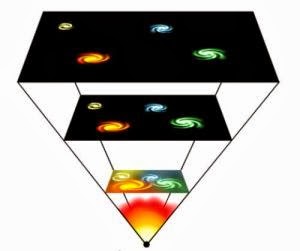 Facebook
Twitter
Pinterest
WhatsApp
Who knows when we’ll be doomed — but according to new calculations from physicists at the University of Southern Denmark, it’s only a matter of time…

The universe will collapse (reverse big bang) if a bubble forms in the universe where the Higgs particle-associated Higgs-field will reach a different value than the rest of the universe. If this new value means lower energy, and if the bubble is large enough, the bubble will expand at the speed of light in all directions. All elementary particles inside the bubble will reach a mass that is much heavier than if they were outside the bubble, and thus they will pull each other into supermassive centers. (Credit: Image courtesy of University of Southern Denmark)

This is what the math says: Sooner or later a radical shift in the forces of the universe will cause every little particle in it to become extremely heavy. Everything — every grain of sand on Earth, every planet in the solar system and every galaxy — will become millions of billions times heavier than it is now, and this will have disastrous consequences: The new weight will squeeze all material into a small, super hot and super heavy ball, and the universe as we know it will cease to exist.

This violent process is called a phase transition and is very similar to what happens when, for example water turns to steam or a magnet heats up and loses its magnetization. The phase transition in the universe will happen if a bubble is created where the Higgs-field associated with the Higgs-particle reaches a different value than the rest of the universe. If this new value results in lower energy and if the bubble is large enough, the bubble will expand at the speed of light in all directions. All elementary particles inside the bubble will reach a mass, that is much heavier than if they were outside the bubble, and thus they will be pulled together and form supermassive centers.

“Many theories and calculations predict such a phase transition- but there have been some uncertainties in the previous calculations. Now we have performed more precise calculations, and we see two things: Yes, the universe will probably collapse , and: A collapse is even more likely than the old calculations predicted,” says Jens Frederik Colding Krog, PhD student at the Center for Cosmology and Particle Physics Phenomenology (CP ³ — Origins) at University of Southern Denmark and co-author of an article on the subject in the Journal of High Energy Physics.

“The phase transition will start somewhere in the universe and spread from there. Maybe the collapse has already started somewhere in the universe and right now it is eating its way into the rest of the universe. Maybe a collapsed is starting right now right here here. Or maybe it will start far away from here in a billion years. We do not know,” says Jens Frederik Colding Krog. (Oleg Antipin, Marc Gillioz, Jens Krog, Esben Mølgaard, Francesco Sannino. Standard model vacuum stability and Weyl consistency conditions. Journal of High Energy Physics, 2013; 2013 (8) DOI: 10.1007/JHEP08(2013)034)

Although the new calculations predict that a collapse is now more likely than ever before, it is actually also possible, that it will not happen at all. It is a prerequisite for the phase change that the universe consists of the elementary particles that we know today, including the Higgs particle. If the universe contains undiscovered particles, the whole basis for the prediction of phase change disappears. Then the collapse will be canceled. And there will still be a Christmas this year, everyone will still have to pay taxes, and the Obama regime will continue to damage the nation for another three years.