The Latest from the White House on ObamaCare 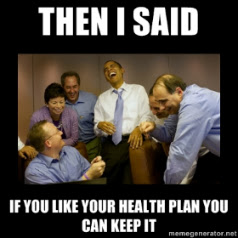 And here I was, thinking that Congress made the law. It turns out that Barack is doing it by presidential edict…but only when it suits him. ObamaNation…

(Fox News) The Obama administration, in an 11th-hour change just before the holiday break, announced a major exemption in ObamaCare that will let people who lost coverage and are struggling to get a new plan sign up for bare-bones policies.

The move Thursday to allow potentially hundreds of thousands of people to sign up for “catastrophic” coverage plans was blasted by the insurance industry as a shift that would cause “tremendous instability.”

The administration downplayed the sudden change, saying they expected it to impact fewer than 500,000 people.

An insurance industry official, speaking not for attribution, told Fox that while the administration was playing down the significance of the move, it could turn out to be a troublesome last minute change and the industry fears far more than the 500,000 people will apply.

Less than two weeks from going live, the White House seems to be in full panic mode. Rather than more White House delays, waivers, and exemptions, the administration should provide all Americans relief from its failed law. Five and a half million people who used to have health insurance won’t have it anymore on January 1.