Miley Cyrus
She is pictured (right) holding her ‘comfort pet’, on her way to a safe space, sad that President Trump won the election and irritated that conservatives are holding her to her word to leave the US – forever.

Cynical conservatives have suggested that she move to Saudi Arabia, where her progressive values will be more appreciated. As a Muslim country, The Magic Kingdom is known for its tolerance.
Cyrus on stage (left) sets a progressive example for America’s youth that she feels will be missed once she’s gone to Saudi Arabia. Message to Miley – not so much. But if the Saudis don’t want her, maybe the Ugandans will take her and will make her ‘their own’.
No matter what, Miley – make good your threat and leave. Have a little dignity…ok, not possible. Sorry for the suggestion.
My question: Why are you still here? 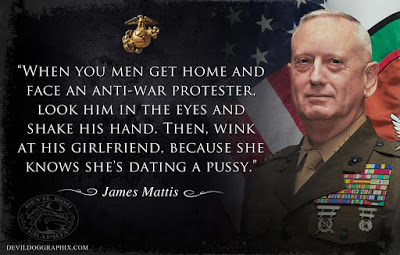 Mad Dog Mattis as Secretary of Defense
Known as “Mad Dog Mattis,” the retired general was credited with a string of colorful quotes over the years, including: “Be polite, be professional, but have a plan to kill everybody you meet.”
My question: How does General Mattis feel about the global warming mission for the military?


Vice President Pence attended the Broadway show, Hamilton. Brandon Dixon chose to single out the Vice President in a fit of progressive indignation. It’s the sort of rude behavior that we’ve come to expect from progs. It was ironic that that Brandon Victor Dixon, the actor portraying Vice President Aaron Burr, who killed Alexander Hamilton in a duel, delivered the rebuke. Burr was later suspected of having conspired to traitorously divide the western states and territories from the nascent United States.
I saw it on the news and have a question: Why do they have a non-white homosexual person playing Aaron Burr, a straight white man? (or is it racist and homophobic to ask?)
I may pass on the play.