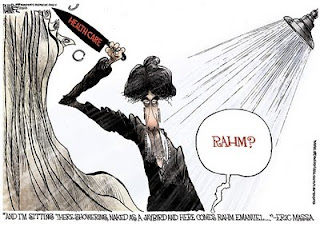 It sounds like some sort of sexual assault to me.
LINK
John Kass, Chicago Tribune reports the following (please follow the link to the whole story)

But it’s been seared onto our brains — just like that weird wrestling scene from the movie “Borat” — thanks to former U.S. Rep. Eric Massa, D-N.Y., who resigned the other day amid allegations he sexually harassed male staffers.

“Let me tell you a story about Rahm Emanuel,” Massa said on a recent radio program, talking about taking a shower in the Congressional Gym.

“I’m sitting there showering, naked as a jaybird, and here comes Rahm Emanuel not even with a towel wrapped around his tush, poking his finger in my chest, yelling at me because I wasn’t going to vote for the president’s budget. Do you know how awkward it is to have a political argument with a naked man?”

I think that somebody should launch an ethics investigation into this incident. Were there witnesses who won’t be intimidated by the White House or the SEIU thugs who might have also been in the locker room at the time and can testify as to the events as shared by Congressman Massa? Does anyone doubt that Rahm Emanuel is beneath doing something like this?  Is this what the Democratic Party has come to? Democrats – are you actually PROUD of this sort of man working as Chief of Staff to the President of the United States?