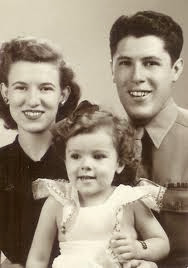 Facebook
Twitter
Pinterest
WhatsApp
A boy named Stanley is traumatized and abandoned.
1926: Eight year old Stanley Dunham discovers his mother’s body after she has committed suicide. Stanley’s father then abandons the traumatized boy, leaving Stanley in the care of his maternal grandparents in El Dorado, Kansas.
Stanley is psychologically devastated by suicide & abandonment! Stanley Dunham becomes a troubled teen. The emotionally damaged boy grows into a rebellious teenager. Stanley punches his High School principal and becomes a drifter, hopping rail cars to Chicago, then California, then back again. At age 20, he marries Madelyn Payne on the night of her Senior Prom.
The hurt little boy grows into an angry young man. Stanley spends time as a rail hopping drifter. Just before leaving to fight in World War II in 1942, Stanley impregnates Madelyn. A girl is born on November 29, 1942. Because Stanley wanted a son, he names the girl after himself – Stanley Dunham. (Middle name of Ann)
After the war, the Dunham’s bounce around the country for 15 years – moving to California, back to Kansas, to Seattle, WA, to Mercer Island, WA, and finally to Hawaii. Stanley is teased about her boyish name at every new school she attends. The instability of constantly moving, the teasing / bullying over her strange name, and the constant reminder that her father wanted a boy – will combine to turn young Stanley Ann into a traumatized, dysfunctional person, much like her father.
At 17, Stanley Ann now goes simply by “Ann”. By this time, she has already embraced Marxism (as had her father), is posing naked for a Communist named Frank Marshall Davis, bashing America, and having sexual relations with older black men. By so doing, she demonstrates that she can reject the world that rejected her. 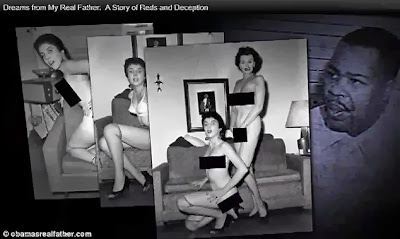 Frank Marshall Davis (photo above – to the right) had a passion for photography and pornography. Stanley Ann is impregnated by one of two Black Communists. Nobody knows to this day which one.
1960: Still a 17 year old college freshman, Stanley Ann becomes pregnant. She claims that a Kenyan Marxist named Barack Obama (who she met in a Russian language class) is the father. Obama, apparently unbeknownst to Dunham at the time, has his own wife and children back in Kenya. Ann was having sexual relations with another black man during this time – Frank Marshall Davis (more on him later).

Obama looks nothing like his Kenyan father, but closely resembles Frank Marshall Davis.

Barack Obama Jr. is abandoned by his Kenyan father. Less than four years into the unlikely marriage, Stanley Ann divorces the Kenyan bigamist. Barack Sr. returns to Africa in 1964. Little “Barry” experiences his first abandonment. Barry will briefly see his alleged father again in 1968, when he is about eight years old, only to have to say goodbye to him. Barack Sr. will later die in a traffic accident in 1982. 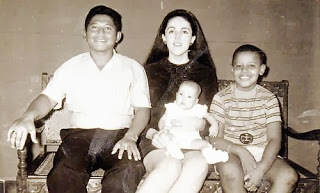 In 1965, Stanley Ann marries Lolo Soetero. She, Lolo, and little Barry settle in Indonesia. (Ann and Lolo will divorce in 1980) Stanley Ann has a baby girl with her new husband.
Already a full-fledged feminist Marxist, Stanley Ann Soetero hires ‘Evie”, a transvestite, to care for young Barry. Evie recalls to reporters (articles in The Guardian) how she used to love to put make up on little Barry and dress him up like a girl. She denies sexually molesting the future “leader of the free world”.

In 2012, it was revealed that Nanny Evie is now a broke homosexual prostitute.

After having a daughter with Lolo, Ann ships 10 year old Barry off to Hawaii to be raised by his grandfather.
Grandpa Dunham is friends with the Communist bi-sexual Frank Marshall Davis. Davis will become a mentor to young Barry. It was Davis, an avid photographer, who took the nude photographs of young Stanley Ann Dunham.
Davis tells of his sexual deviance in a book entitled “Sex Rebel Black“, written under the pen name of Bob Green. In lurid detail, he describes 3-way sex sessions between himself, his wife, and a young girl named “Ann.”
Teenage Barry is lazy student and a heavy drug user. By the end of High School, generations of family dysfunction and painful rejection will have already shaped the man that Barack Hussein Obama will become.
By his own adult admission, Obama wastes his High School years as a heavy pot smoker and a mediocre student.
After high school, Obama is a self-described mediocre college student at Occidental College in California.
At some point during the 1980’s, Frank Marshall Davis, and others above him, plug “Barack Obama Jr.” into the subversive network of Professor William Ayers. Ayers and his wife, Bernadine Dohrn, are former FBI fugitives and founders of the Communist / terrorist Weather Underground. Obama is to be decorated with Ivy League degrees and groomed to be the first Black President. Obama began his first political campaign in the Chicago living room of Ayers and Dohrn.
The radical Marxist Reverend Jeremiah Wright specializes in finding women to marry the professional men who frequent his church. The angry Michelle and Obama are believed to have been matched up by the Reverend. There is no record of any other women in Obama’s life prior to Michele. Few men would marry a continually angry woman. So Reverend Wright gave her to Obama.
And the rest falls under the rubric of more recent history.
I leave the conclusions for you to draw on your own.
Roots form the basis of a tree.
Tomorrow, Roots (Part 2)