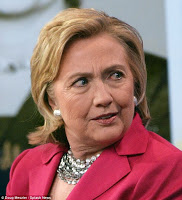 Facebook
Twitter
Pinterest
WhatsApp
There are problems associated with any pardon of Hillary Clinton. Those actual (and jailhouse) lawyers who visit the blog may wish to weigh in with your opinions.

There are many violations of USC that we are aware of, but she has not been charged.  Each one of those violations would need to be laid out in a pardoning document along with the time period in which the crimes took place and a factual basis must be presented (think of an ‘Albert plea’).
A presidential pardon is not blanket forgiveness, thus if Hillary committed acts of treason, for example, since she hasn’t been charged with treason, the document would allege treason and she would be pardoned for it.
If the pardon misses something, she can still be prosecuted.
Enter the Clinton Foundation, which remains under investigation. A pardon would surely have to include acts committed in connection with the foundation and the implications would have some far reaching ripples for those souls not important enough to receive Presidential clemency. The tax liability alone would keep a hundred IRS agents busy for the next four years at least even if Hillary herself received a pass. The pardon would present a road map for investigators to follow to round up the coterie of Clinton associates and would inevitably lead to their prosecution with Hillary as a witness. They may also rope Barack in as a witness or possibly in some cases as a co-defendant. We don’t know at this point.
And what about Slick Willy? Would Barack pardon him too? And Huma Weiner – clemency or not? If he pardoned Huma Weiner, what about disgraced congressman and pedophile, Anthony Weiner?
Very messy.
Barack is keenly aware of his legacy, which doesn’t amount to much at this point. A Hillary pardon would be one of those documents so vast in its bulk and so extensive in its detail, that it would shame him now and through history. Thus I don’t think that he will do that before he leaves office.