I Believe that Obama is the Problem 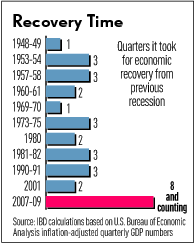 The most concerning problem with the economic disaster we’re stuck in courtesy of run-away Congressional spending paired with the Obama Administration’s Keynesian economic model is that we don’t seem to have found a bottom yet. You can’t pull out of it until you bottom out. Yes, Vice President Joe (Slow Joe) Biden has said that we’re climbing out for the past three years as the numbers get worse. Ignore him.
There are a number of books predicting gloom and doom (and they sell). People want some sense of certainty in a very uncertain world and they turn to the ‘experts’.  Unfortunately the experts are seldom more correct than a broken clock (right twice a day). Because I’m clearly not an expert, I don’t fall into that model ;^). 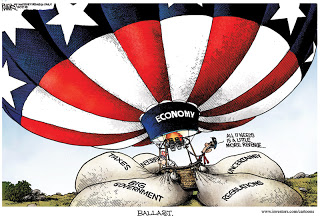 Quite frankly, I think that the only thing that will inspire sufficient confidence to pull out of this mess that we’re in will be Obama’s departure from public office. The business community (other than Warren Buffet) doesn’t trust him and they’re not going to go out on a limb and hire people in anticipation of a better business environment with him sitting in the White House. Obama’s dismal leadership, his un-American behavior and his anti-business stance are a leading factor in why things are not getting better. Even the labor unions are leaving that sinking ship. (LINK).
Obama almost single handedly created the Tea Party in America. So, yes, he has done something right.