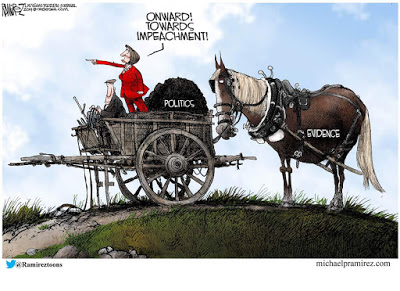 
Frenzy and Fury
There are two reasons why the Ukraine story has created panic among the Democrats.

(1) It threatens Biden and Biden is the only one of the Democrats (with the possible exception of Rep. Tulsi Gabbard (D-HI)) who won’t run as a socialist or “National Socialist” with a promise to take away cars, meat and raise taxes astronomically while “tearing down the wall” between the US and Mexico. Most Democrats inside the beltway understand that having an old communist clown like Sanders or a fake Indian like Warren makes the circus more amusing, but even they don’t want to see them as the party’s standard bearer. It’s why they stood by and let Hillary snatch the nomination from Sanders in 2016.
(2) It has dawned on the DNC that President Trump, with his increasing favorability rating, has a very good chance of winning and switching the House of Representatives back to the Republicans. Another “IMPEACH TRUMP” push is sure to dirty up the President.

Fredd observes – Aren’t there ANY decent liberals/progressives left anywhere in this country? You know, those we used to call the ‘loyal opposition,’ those with whom we could disagree without being disagreeable? I can’t name any, other than perhaps Howard Schultz, maybe Mark Cuban?

The modern-day Democrat wants nothing less than to demonize and ultimately incarcerate any conservative opponent, and characterize the difference between them and their adversaries as good vs evil (they being the good, of course).

Joe Biden is the slimiest slimebag to ever blow in from Slime Town. This scuzz bucket is so corrupt, he gives corruption a bad name. And his little boy Hunter hasn’t fallen far from the tree, he’s a damn criminal to put a happy face on his dealings with China and Ukraine.

Now we are facing Pocahontas, who considers everybody in the country who has a few nickels to rub together as evil capitalists who should have all of their ill-gotten gains confiscated.

This upcoming general election should be awfully interesting, if the brain dead electorate is paying any attention at all to any of this.

There actually are Democrats (think Goldman Sachs) who dump a lot of money into the coffers of the DNC and while Biden is only a useful idiot, he’s THEIR useful idiot…a lot like Barack was. Supporting Sanders, Warren, the Butt Guy and Beto is not something that they want to do. Harris can’t even eek out better than fifth place in CALIFORNIA. Will they switch to President Trump? Either that or just stay away and let the Republicans sweep 2020.
Let’s look at the history of the Impeach Trump movement.
April 2016: Politico ran a story headlined: “Could Trump Be Impeached Shortly After He Takes Office?” It starts by saying that, “Donald Trump isn’t even the Republican nominee yet. But … ‘impeachment’ is already on the lips of pundits, newspaper editorials, constitutional scholars, and even a few members of Congress.”
January 2017: The same day Trump was inaugurated, the Washington Post ran a story saying that the “effort to impeach Trump is already underway.”
Feb 2017: An impeach Trump online campaign already had attracted 650,000 signatures.
April 2017: Rep. Maxine Waters leads an “impeach Trump” chant.
November 2017: Six House members introduced articles of impeachment against Trump, claiming he obstructed justice, violated the Constitution’s foreign emoluments clause, and undermined the federal judiciary process and the press.
May 2018: Rep. Al Green says “there’s a good likelihood there will be articles of impeachment” brought against Trump if Democrats reclaim the House.
June 2018: Five months before she was elected to the House, Rep. Alexandria Ocasio-Cortez said Trump should be impeached, claiming, “There are serious grounds in violations of the Emoluments Clause from day one.” 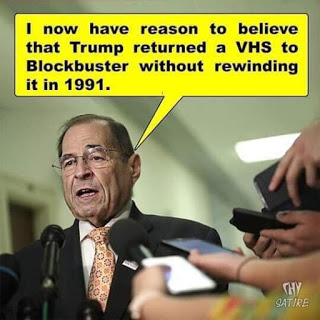 July 2018: After Trump’s Helsinki press conference with Vladimir Putin, Democrats declared that his conduct was grounds for impeachment. Former CIA Director John Brennan tweeted that “Donald Trump’s press conference performance in Helsinki rises to & exceeds the threshold of ‘high crimes & misdemeanors.’” “It was nothing short of treasonous.”
December 2018: Rep. Jerry Nadler says Trump could be impeached for the alleged payoffs to porn star Stormy Daniels. “Certainly they’d be impeachable offenses because even though they were committed before the president became president, they were committed in the service of fraudulently obtaining the office,” he asserted.
And all this, of course, was before Special Counsel Robert Mueller released his findings on the Russia investigation, which took the wind out of the sails of the impeach Trump crowd. Now, conveniently enough, a new charge emerges even though the Democrats have yet (as of this writing) to read the transcript that holds the impeachable offense. Given that there are usually around a dozen people on those calls, I would find it surprising if it’s more than another witch hunt in a long series of witch hunts.
Meanwhile at the White Wolf Mine
High on Arizona’s Mogollon Rim, the DC/NY tempo and frenzy is absent. This is Trump country where God, guns and the president are respected and revered. The days are getting shorter, the nights cooler, and we’ve had three days of rain. It means that I need to think about winterizing the house.
I hired a roofing company to put up snow shields on the steel roof. They sent me an invoice. I didn’t pay it. Then they called, asking why no check. I replied (No ticky, no laundry) that they needed to do the work first, and I would pay them by cash or check when they finished. [long silence] “ok”. The problem is that I will be out of town shortly, so they need to get on it, or I’ll pay them when I return… They said that they’ll be on it next week.
And so it goes.
Now the mail:

Ed said – “And I took that 6 foot length of chain, and I faced that Ukrainian President….”

I know, it was terrifying to hear the account of how Ukrainian President Volodymyr Zelensky was forced to drop his straight razor into a bucket of water, “get ’em rusty, boys”….

LSP – You’d think they’d want to stop people looking into their corruption but apparently not. The Bidens must be cursing the Squad right about now.

The Squad has only one job. To insure the reelection of Donald J. Trump in 2020.

Camperfixer summarises – Let’s see…
Fixing the election didn’t work, the” Insurance Plan” didn’t work, Russia Collusion and the 42 million dollar Meuller investigation and report didn’t work, entrapping various administration members didn’t work, Stormy Daniels and the Creepy Porn Lawyer didn’t work, smearing Justice Kavanaugh didn’t work, and a host of “other” nefarious lies and deceitful garbage didn’t work. BUT…when the president calls another country’s leader to discuss important matters – as he is lawfully able to do – an unknown “whistle blower” who wasn’t actually there but after being promised his mortgage would be paid off, we have Camilla DeVille Pelosi (snerk) looking into her smudgy political mirror on the wall which tells her to trot out the impeachment “inquiry” because THIS WILL NOW WORK. They got him now…not.
The Dem’s – thinking they are vastly more savvy and smarter than this President…are toast. This scum is so delusional on their own self-importance – having gotten beyond desperate so will try ANYTHING – that they cannot see the President has sold them the very rope they will hang themselves. Stupid is what stupid does….which – for a change – is good for America.

Some cynics believe that the President set up the donkeys with this story for the express purpose of re-igniting the Biden Ukraine and China scandals.

Kle – Well, I can’t see how the Impeachment is going to accomplish anything but to hand 2020 to Trump. It’s not as if the Senate is likely to proceed on any sort of consequence, even if the House can somehow actually impeach. Running failed Impeachments (the only kind, essentially) has always been a disaster for the instigators’ political ilk.

So, hooray for that, I guess. Also, while they are having their big Impeachment group-wank, they won;t have any time for passing bad Bills, so win / win.

I’m wondering what the Dems (the saner ones) see in the effort, though. Is virtue-signalling at the expense of Power really worth it to the Dem Old Political Hack Guard? More interestingly, are Pelosi et al hoping that the double failure might sweep away the New Frothing Revolutionary wing of the party?

I do kinda get a kick out of all the Dems and Press (Dem Minions) trying to say “it’s Patriotism when I do it, but it’s Treason when you do it” with a straight face…

There are a lot of the Democrat old guard who are scratching their heads about the potential of creating a new party and allow the National Socialist Worker’s Party go their own way. There are a lot of problems with doing that. The numbers are such that they’d be significantly outnumbered by Republicans if they did. But with people like Beto (Irish Bob) as torch bearers for the current Democrats, they may have no choice.