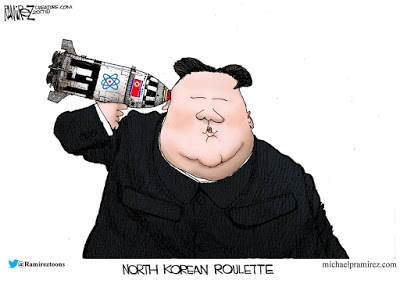 Facebook
Twitter
Pinterest
WhatsApp
North Korea will launch another ICBM this weekend. I’m not sure whether or not they’ll shoot it over Japan. The last time they did that, nothing happened to them, so why not? They’ll keep pushing the envelope, confident that the US is fearful of doing anything to them. They hold the South Korean population hostage to their actions.

Chinese leaders still have not acknowledged the legitimacy of the North Korean missile threat to South Korea and its need for anti-missile defenses. While most international attention has focused on the North’s long-range missiles, the threat to South Korea is from the vastly larger arsenal of short- and medium-range ballistic missiles.
Chinese Foreign Ministry press spokespersons never seem to get or, perhaps, accept questions concerning Kim Jong Un’s statements about forcefully reuniting the Korean peninsula.
Geng Shuang answered several questions about China’s position on imposing additional sanctions on North Korea.

The US has proposed a total embargo of oil shipments to North Korea; a ban on textile exports from North Korea; a freeze on financial accounts that serve the government and termination of contracts for North Korean workers. The US also seeks UN backing for stopping North Korean-flagged ships at sea.
China is unlikely to support the US draft Security Council Resolution without significant modifications. Russia is even less likely to accept it. Nevertheless, Chinese leaders know and have admitted that the Security Council must take additional measures. China’s concurrence has the effect of channeling international outrage through the Security Council, heading off new sanctions by individual countries.
North Korea’s chief delegate to the Eastern Economic Forum said North Korea would counter US sanctions with powerful countermeasures of its own. Maybe the long awaited missile strike at Guam?