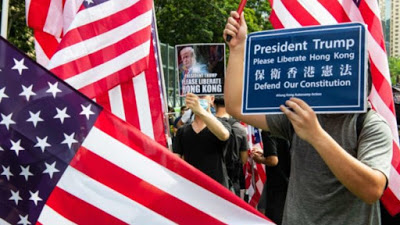 The intensity of street protests in Hong Kong has only increased despite hundreds of arrests, clouds of tear gas and volleys of rubber bullets. What started as a popular protest against a proposed extradition law has hardened into a struggle for the soul of Hong Kong, and for the freedom that they wish to enjoy.
On Wednesday, Carrie Lam, Hong Kong’s embattled chief executive, said she was withdrawing the extradition bill, but things have gone on too far for that to have any impact. Nothing short of freedom in the American model is good enough for the bulk of the protesters.
Lam has become the poster child for everything that the protesters hate about Beijing and I don’t know whether her resignation would have much effect or not. I doubt that it would at this point. One of the key demands of the protesters is universal suffrage in a multi-party environment, which is absolutely unacceptable to the Communist Chinese. It sets an unacceptable precedent to other places in China. There is only one-party and that one is run by a group of oligarchs in Beijing. When you think about it, the situation in North Korea is very similar. It’s similar to any organization run by man rather than ruled by laws. Allowing the people a voice and a choice rather than ‘one choice alone’ where that choice has an army behind it that won’t hesitate to purge a few million people — is a dangerous move.
One of the central government’s most ardently held tenets is “One China,” which stipulates that territories ceded in weaker times remain sovereign Chinese lands that will eventually revert to full Chinese control.
Macao (’99), a Portugese possession and Hong Kong (’97), a British possession went without a whimper. The subjugation of Tibet in 1950 and beyond was opposed to the extent that the unarmed Tibetans were able. Nationalist China, which occupies Taiwan is the next domino to fall. Whether or not the US would intervene has been a constant source of concern and interest in Beijing. I attended a meeting last night that was attended by my US Congressman and others where the issue of Nationalist China (Taiwan) came up. Whatever hopes Beijing may harbor of bringing Taiwan, a democracy, into its fold would become even more remote if Hong Kong’s “one country, two systems” formula disintegrated in a Tiananmen-style crackdown.
The Hong Kong are fired not by foreign agents and the CIA, as Beijing currently asserts, but by China’s attempts to deny them full participation in their government, which they were promised through 2047 in the agreement under which Britain ceded control over Hong Kong.
The US Government is content to let NGO’s carry the message of freedom to Hong Kong along with money. Beijing suspects a clandestine war by the USA, but it’s not true. The US Administration is focused on its trade war, because others can wage a clandestine campaign and it can keep its distance. If the US openly supported the protesters in Hong Kong, there would never be a trade deal.

The Democratic Left, which is to say the National Socialist Worker’s Party – a lifelong dream of Bernie Sanders, has been embraced by Elizabeth Warren. Slow Joe Biden, is trying to move in their direction but he’s not them. People who know Joe actually like him. The politics of Obama would be considered unacceptably “centrist” in light of the demands of the National Socialist Workers concept of a new collectivist America that abandons the largest supply of oil on Earth and moves toward wind and solar power. No more cars (for the common people), no more airplanes (for the proletariat), no more ships to carry tourists to Hawaii (abandon your time share).
–Response to Fredd and WSF
Fredd, The entrepreneurs such as Howard Schultz (Starbucks) have been asked to stand down. He had been expected to make a decision of whether to run by Summer 2019, but an article in Fox Business put it this way:

Former Starbucks CEO Howard Schultz is said to be postponing his decision on whether to run in the 2020 US presidential election in light of former Vice President Joe Biden’s campaign.

Biden is the Democratic frontrunner in numerous polls and believed to be running on a similar platform to Schultz, people familiar with the Schultz’s strategy said in a Fox Business report published Wednesday

Schultz was expected to make a decision this summer, but that could be delayed until 2020.

Most of the Billionaires-who-would-be-king have seen how the media portrayed President Trump, a man that they didn’t want, from day-one. Oprah, Cuban, Schultz and Bloomberg all enjoy being billionaires with a certain degree of freedom (being President is much like living in a cage/bubble) with time to devote to “being cool”. And moreover, they’re not communists. Which is to say, they’re unacceptable to the media and their communist/national socialist workers masters.
WSF holds the candle of a Michelle Obama entrance. I don’t think that anyone can rule it out, but she’d have to wear her Che t-shirt and read from a teleprompter (unlike Hitler at the rallies at Nuremberg), or she’s likely to just spew hatred for white people, and for the nation in general, which is her default setting. LSP adds, “I’m with WSF on Michelle but perhaps she’s too busy getting Barack to measure curtains for the new seaside mansion?” Yes, LSP, there is that too.
OldAFSarge says – “The current crop of Dems are horrific. Any one of them winning would spell disaster for the Republic.” He’s correct, of course. But a republic is the very last thing that any of these National Socialist Workers Party types have in mind. I think that’s why they hold out particular hatred of Russia. The current batch of Russians betrayed “the revolution” and all that it meant.
Jim speculates – “Sadly Joe is likely the ‘best’ candidate the donkeys have to offer and if nominated I see them putting up someone far worse in the VP slot. In the event that he’s incapacitated in some way, we could wind up with President Harris.” It would have to be a ‘woman of color’ who could step into Uncle Joe’s size 13 wingtips when he died (sadly) in the first weeks of his presidency. The Clintons could arrange it. Maybe pool old Slow Joe would hang himself in the Lincoln Bedroom?
Old NFO – “Re Bahamas, maybe they could get the drug lords to kick in to rebuild them, since that’s been a MAJOR drug gateway to the US for over 40 years. And it’s funny how they think the US ‘owes’ them help. They’re a sovereign nation. We don’t owe them anything other than out of the goodness of our hearts.”
(mood music)* The Bahamians must feel that they’re likely to get a lot more help out of the White House than they will out of Buckingham Palace. I’m not saying that they’re wrong. Maybe we could just buy The Bahamas outright from the British Commonwealth and redevelop the place (with a big beautiful Trump resort)? I’d take it over Greenland and Puerto Rico. As you suggest, there won’t be tourists there for years to come…maybe about the time things are built back up. Until then the people of The Bahamas have a long road back. But we don’t owe them anything.

* RE: Mood Music, Yes there really is a Kokomo Island. The island named Kokomo came AFTER the song though. Kokomo Island is part of the privately owned Sandals Royal Caribbean vacation resort in Montego Bay, Jamaica.