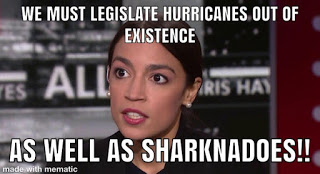 SiGraybeard has an excellent summary. HERE

Unfortunately the Democrats are using it as a stump for global warming/cooling/change, which it is not. There has been no significant change in the number of hurricanes going back to when they were first recorded. That does not stop them. They promise that hurricanes will stop if you fork over X tens or hundreds of $ trillions (the estimate varies on the person speaking). While you’re at it, surrender your firearms, because they’re a bad mojo for hurricanes.
Dorian was a wicked powerful hurricane and The Bahamas were not spared. When you look at what happened, the death toll will be much higher than is currently reported. I expect that there will be people missing that will never be accounted for just because of the extreme flooding and damage. Bodies could be blown hundreds of miles out to sea by a 185 mph sustained wind with gusting to 200 mph. I have no idea what the people who live on The Bahamas will do. Rebuilding will take years and billions.
Hurricanes such as Dorian also rip up underwater habitats. They eat coral and small fish. I recall diving at St. Lucia about three years after s powerful hurricane struck the area. It was like a subsea desert. Some of the coral was starting to come back, but it wasn’t anything that you’d enjoy diving in. So The Bahamas will have that to contend with as well. It will come back, but it will look and feel differently than it did before because they’re essentially starting from scratch.
Slow Joe Biden
We’re months from the first Democrat state primary and the pundits are going wild on who will face President Trump in 2020. Joe Biden isn’t taking a moderate stance, but a more moderate stance than his competitors. He favors single shot firearms…possibly a shotgun that you’d shoot into the air to ward off burglars. Thanks Joe.
The Democrats would like to repeal the ENTIRE Bill of Rights, not just the Second Amendment, but they’d be content if only criminals owned firearms. Of course doing what they’d like – repeal the Electoral College, confiscate firearms, etc. would lead to revolution, but they don’t care. Maybe a revolution would shake things up? It’s not anything that you’d want, but how many of the liberals would be left standing?
As to Biden, his health may or may not hold, his faculties may or may not hold, but after a tough campaign for the Democrat ticket, what shape will he be in to take on The Donald? Democrats in the know, worry about that. Because running a communist who wants to take everything that the nation has and redistribute it to other communists doesn’t play well. And it won’t play well in Congress outside of the few insane districts where poor people would love to loot others who have accumulated wealth.
I think that Biden will crash at some point and you’ll have a different Donkey leading their party.