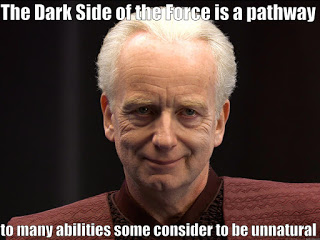 Wife: What is this pile of clothes doing on the floor?
Husband: I just struck down a Jedi.
Wife: I don’t know why I married a nerd. I hate you.
Husband: Yes, use your hate!

I find the look of people with lots of tattoos (like a box of melted crayons was poured over them) to be interesting. I ask myself, “are you sure at age 18, that you want to look like that through life and into the grave?”
Controlling Population as a way to Combat Climate Change
Last Wednesday, National Socialist Bernie Sanders said that one key method of controlling climate change was in controlling the population by encouraging abortion worldwide. Presumably the US would fund that effort. In explaining his position he mischaracterized the Mexico City Policy as an international anti-abortion measure. The Mexico City Policy has nothing to do with birth control and doesn’t prevent abortions. It just prevents U.S. tax dollars from paying for them.
By eliminating the ‘wrong kind of people’ and retaining the ‘right kind of people’ so slavishly (and mindlessly) serve the system, the elites will find it much easier to retain power. Of course the wrong kind of people would be those who support the Bill of Rights and the Second Amendment.
Quotable Quotes

Never, never, never believe any war will be smooth and easy, or that anyone who embarks on the strange voyage can measure the tides and hurricanes he will encounter. The statesman who yields to war fever must realize that once the signal is given, he is no longer the master of policy but the slave of unforeseeable and uncontrollable events.
Sir Winston Churchill, KG (1874 – 1965)

I think that President Trump is the first American leader in recent years who fully grasps this.

Paul L. Quandt – “…which is to say the National Socialist Worker’s Party…”

America doesn’t emphasize a study of history anymore, do we? I wonder why?

How many people are going to catch that? Granted, you have an unusually highly read readership/commenters and most ( if not all ) of them will. But many, if not most people in our country would not understand the reference, even with all the hints later in the post.

This blog’s readership are not very progressive. Hillary called them “deplorable”, bitterly clinging to God and guns. It’s great blogging with them, and they are exceptionally well referenced. Bernie Sanders espouses the very same political doctrines as the NAZI (National Socialist Worker’s Party) did when it overthrew the Weimar Republic (Germany’s government from 1919 to 1933). The Democrats (who struggle daily to decide which restroom to use) think that a National Socialist Worker’s Party is a splendidly innovative idea. Very progressive, Very 2020. God bless ’em. 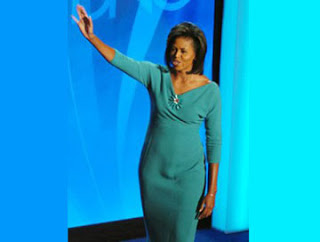 WSF on Michelle for President – Why Michelle? Several reasons. She wants a third term. Widely popular. Avoided making deadly enemies as First “Lady”, or whatever. After a bitter primary, no Dim candidate will have enough delegates to win on first ballot. More bickering will ensue. She will be put forth as the only Dim that beat President Trump, and will be nominated by “acclimation”.

She’d also be the first tranny president. It would be as novel as her husband being the first half white president. It would break that glass ceiling. Some feel that the dom-and-sub thing that she has going on with Barack would create a trend that you find best illustrated in gay pride parades. I don’t know if that’s true, but it’s currently trending speculation. Joan Rivers was allegedly killed because she outed the Obamas two weeks before she died.

It is one of those taxes that goes to the right place for the right purpose. Thank you for mentioning it and it’s officially passed on.

CUBE asks – “What can we do to resist the CHICOMs?”

There are different approaches currently being used. President Trump is working toward eliminating the $600-$700 billion that they earned in bad trade deals against us annually. That stings China and their economy.  Voting for President Trump as opposed to the Butt Guy, Beto or those other cretins is helpful. There are also organizations such as the National Endowment for Democracy that accept tax free donations and the money goes to support the resistance in Hong Kong. If you want to point the CUBE fortune in that direction or other NGO’s, that’s useful too, I guess. Bottom line, it’s up to the people in Hong Kong to decide their futures. Just like the patriots during the American Revolution or the people of the USA who will vote to ensure a republic – or not.