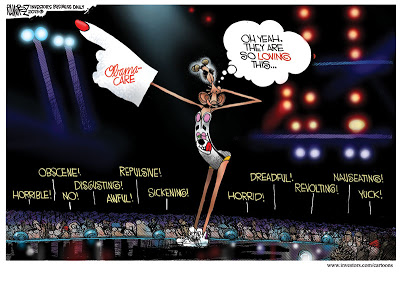 Facebook
Twitter
Pinterest
WhatsApp
Labor Day – 2013
Organized Labor has all but given up on the concept of a 40 hour workweek being the American Standard moving forward as their champions in Congress saddled the country with ObamaCare. Now American labor is coming to terms with the concept of a 29 hour work week, making it necessary to work two jobs (58 hours a week) to earn what they used to earn in 40 hours.
I can’t help but hope that Organized Labor puts this cataclysmic fiasco at the feet of the Democratic Party where it belongs.

However, labor has a history of backing the Democratic Party irrespective of who is running, because that’s simply how the machine has been tuned to operate.

Letter to Harry Reid and Nancy Pelosi (and Barack Obama)

When you and the President sought our support for the Affordable Care Act (ACA), you pledged that if we liked the health plans we have now, we could keep them. Sadly, that promise is under threat. Right now, unless you and the Obama Administration enact an equitable fix, the ACA will shatter not only our hard-earned health benefits, but destroy the foundation of the 40 hour work week that is the backbone of the American middle class.

Like millions of other Americans, our members are front-line workers in the American economy. We have been strong supporters of the notion that all Americans should have access to quality, affordable health care. We have also been strong supporters of you. In campaign after campaign we have put boots on the ground, gone door-to-door to get out the vote, run phone banks and raised money to secure this vision.

Now this vision has come back to haunt us.

Since the ACA was enacted, we have been bringing our deep concerns to the Administration, seeking reasonable regulatory interpretations to the statute that would help prevent the destruction of non-profit health plans. As you both know first-hand, our persuasive arguments have been disregarded and met with a stone wall by the White House and the pertinent agencies. This is especially stinging because other stakeholders have repeatedly received successful interpretations for their respective grievances. Most disconcerting of course is last week’s huge accommodation for the employer community—extending the statutorily mandated “December 31, 2013” deadline for the employer mandate and penalties.

Time is running out: Congress wrote this law; we voted for you. We have a problem; you need to fix it. The unintended consequences of the ACA are severe. Perverse incentives are already creating nightmare scenarios:

First, the law creates an incentive for employers to keep employees’ work hours below 30 hours a week. Numerous employers have begun to cut workers’ hours to avoid this obligation, and many of them are doing so openly. The impact is two-fold: fewer hours means less pay while also losing our current health benefits.
Second, millions of Americans are covered by non-profit health insurance plans like the ones in which most of our members participate. These non-profit plans are governed jointly by unions and companies under the Taft-Hartley Act. Our health plans have been built over decades by working men and women. Under the ACA as interpreted by the Administration, our employees will treated differently and not be eligible for subsidies afforded other citizens. As such, many employees will be relegated to second-class status and shut out of the help the law offers to for-profit insurance plans.

On behalf of the millions of working men and women we represent and the families they support, we can no longer stand silent in the face of elements of the Affordable Care Act that will destroy the very health and wellbeing of our members along with millions of other hardworking Americans.

We believe that there are common-sense corrections that can be made within the existing statute that will allow our members to continue to keep their current health plans and benefits just as you and the President pledged. Unless changes are made, however, that promise is hollow.

We continue to stand behind real health care reform, but the law as it stands will hurt millions of Americans including the members of our respective unions.

We are looking to you to make sure these changes are made.

(Michelle Malkin) In what is being reported as a surprise move, the 40,000 members of the International Longshore and Warehouse Union (ILWU) announced that they have formally ended their association with the AFL-CIO, one of the nation’s largest private sector unions. The Longshoremen citied Obamacare and immigration reform as two important causes of their disaffiliation.
In an August 29 letter to AFL-CIO President Richard Trumka, ILWU President Robert McEllrath cited quite a list of grievances as reasons for the disillusion of their affiliation, but prominent among them was the AFL-CIO’s support of Obamare.
“We feel the Federation has done a great disservice to the labor movement and all working people by going along to get along,” McEllrath wrote in the letter to Trumka.
The ILWU President made it clear they are for a single-payer, nationalized healthcare policy and are upset with the AFL-CIO for going along with Obama on the confiscatory tax on their “Cadillac” healthcare plan.
Socialism only works when you’re picking SOMEBODY ELSE’S POCKET.