The Future of Gitmo 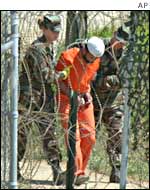 Context:  The Bush Administration made a policy decision to detain suspected enemy combatants, taken by USGOV during the War on Terror at Guantanamo Bay, Cuba based on legal considerations. The facilities (one CIA facility, now closed and one US Military facility – Camp X-Ray) offered a safe and secure location away from the battlefield where captured persons could be interrogated and potentially tried for war crimes they may have committed.
The Bush Administration felt that by keeping incarcerated combatants at a facility outside of the United States that they would avoid the possibility that those combatants could pursue legal challenges relating to their detention. The facility was adjudged by the Bush Administration to be beyond the jurisdiction of federal courts and non-citizens there would not have access to substantive procedural protections that would be required if they’d been detained in the US.
This blog post is neither a legal analysis or a polemic on the relative moral values of continued detention.
Legal Analysis

FAS Report  ==  This report provides an overview of major legal issues that are likely to arise as a result of executive and legislative action to close the Guantanamo detention facility. (For your consideration)

Personal Analysis
Early on, before the CIA facility and Camp X-Ray were established, there was discussion among “the little people” who had input into the Bush Administration’s policy decision from within the intelligence community. Without going into onerous detail, there were two schools of thought. One represented the way that it all turned out, and a second felt that all prisoners needed a determinate resolution, even if that adjudication was life in prison without the possibility of parole.
This was the other school of thought.
If we close the Gitmo facilities, what legal issues do we face relating to the transfer of detainees to foreign countries?

How do we prevent foreign military combatants from re-engaging in hostile activity against the US if they are released?
What do you think?