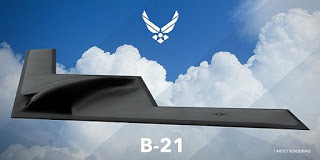 Facebook
Twitter
Pinterest
WhatsApp
The Raider
The first Northrop Grumman B-21 Raiders are under construction and should be operational by 2025. It’s the Air Force’s new Long Range Strike Bomber (LRS-B) program. Many details are classified but it’s designed to have a very long range, and to eventually replace the B-2, B-1, and B-52 aircraft. I expect that it will look much like a larger version of the B-2, which has a successful, stealthy design shape. The strike package that it will carry will vary based on mission, but expect it to deliver the newest version of hypersonic (scramjet powered) cruise missiles armed with thermonuclear or conventional weapons.

When you read this blog, it’s not like reading “Aviation Leak”. I don’t have much new to share in that way. I’m a fossil. I thought that being on the ground, lazing a target and having a B-52 on call overhead with smart munitions with rotary launchers that would drop an old iron bomb (snake eye) with a new guidance package was pretty darned cool.
Now, it’s a B-21, standing off 400 miles, (roughly the distance between Los Angeles and the New Mexico State border) selecting the warhead you want, launching a hypersonic missile traveling 4,000 +/- mph (1.1 miles per second) and having it hit the target you’ve designated six minutes later. It’s awesome power for the SEAL/ODA Type on the ground. Sure, they’re expensive, but it has the benefit of shortening the war you’re fighting.
Some of the new US Cruise missiles are said to be Mach 10 capable, so make the delivery time three minutes. You can play with numbers all day, but the payload hauler can be a very long way from the target and launch missiles that are very difficult to shoot down that travel with blinding speed and make short work of, say, Iran’s capacity to pump, refine and deliver oil.
Let me scale it for you. One B-21 should have the comparable strike capacity of a Navy aircraft carrier. And we’re buying a lot of them with taxpayer dollars.

Hypersonic Missiles (more here from the US Naval Institute) are the new high ground delivery systems for precision demolition (the spear point).

They differ from existing technologies in three critical ways. First, because kinetic energy is a function of the square of velocity, a one-kilogram object delivered precisely and traveling multiples of the speed of sound can be more destructive than one kilogram of TNT. Second, the low-altitude path helps mask HCMs; when coupled with the curvature of the Earth, they are mostly invisible to early warning radars. And third, HGVs can maneuver during flight; in contrast with the predictable path of ballistic-missile descent, they are more difficult to intercept, if even detected. By offering the precision of near-zero-miss weapons, the speed of ballistic missiles, and the maneuverability of cruise missiles, hypersonic weapons are a disruptive technology capable of striking anywhere on the globe in less than an hour.