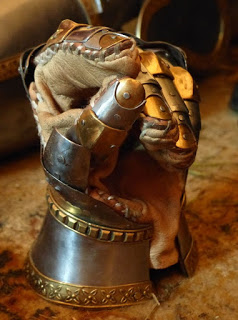 *Am I the only one who thinks that Nancy got drunk and lost the articles of impeachment?

* This is a close up of one of Gallois de Fougières’ gauntlets. He wouldn’t have fit in well on one of today’s college campuses. Of course neither would many of this blog’s readers. He died at Agincourt, charging the English line of archers.

* In order to be a US President, the person must be a natural born US Citizen, over 35 years of age, and may only serve two terms. We need the same requirement for Congress.
* If cats could text you back, they wouldn’t.

* Prince Harry and his wife want to settle in Los Angeles as part of their MEXIT, but won’t move to the USA until President Trump is no longer president. They may have a wait. Then they’ll have to wait for Ivanka to complete her 8 years, then Don Jr’s 8 years, etc.

CCW’s in California
There is a good breakdown on requirements HERE. It all depends on how “woke” the county where you live is. But as you’ll note, a lot of the state is relatively conservative. The problem is that the inner city hells tends to vote Democrat. 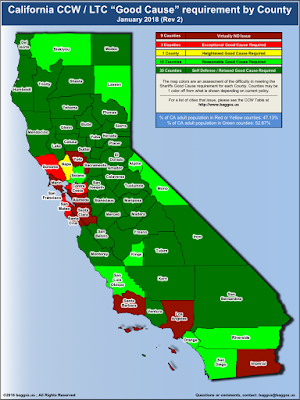 (More Here) “He would only play with blue chew toys, and for some reason, he really liked watching reruns of ‘Xena: Warrior Princess,’” Flaherty added.
“We took to each other pretty quickly,” said Spc. Jeffrey Grassley, a military policeman and dog handler partnered with Tracker. “I mean, it’s a little weird that they tell me to call him a ‘him,’ since he’s obviously a female dog, and there was that time last month when he was laid up for a few days after he gave birth to a litter of puppies, but we’ve really forged a close working friendship.”
Tracker, who was raised as a female dog under the name Regina, first identified as a male during the initial breeding and selection process the military uses to screen potential military working dogs.

(link)  A recent study found that the growth in some women’s shooting disciplines is up nearly 200 percent. We all know how progressive it is to attack unarmed, helpless women. This trend is likely to ruin the statistics of some universities specializing in courses in women’s victimhood.