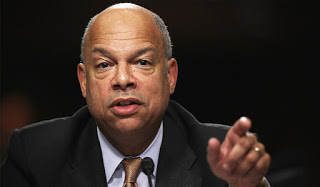 There is a deep seated reason why Barack Obama and his administration are loathe to brand Islamic Terrorists for what they are, and to direct his branch of government to ferret them out. Much of it has to do with his family’s communist roots (both grandparents who raised him and Frank Davis Marshall, who mentored him as a young boy). When Barack was a boy, the search for communists was still real as the FBI documented their politics and involvement in plots to undermine the US Govt.

When I was a boy, being called ‘a communist’ was the sort of insult that could not possibly be left unanswered. They were ‘fighting words’. Apparently not today? Fighting words have changed. When I was young, being called a ‘cock sucker’ ended up with fists and feet. (I don’t think that was true of Barack, who had a tranny nanny.) But I digress.

Homeland Security Director, Jeh Johnson’s family history is troubling. As Muslim terrorism hits closer and closer to home, our Homeland Security chief views the war on Islamic terrorism as a another Red scare, as does his boss, Barack. You will recall after the San Bernardino Massacre, that the President referred to as “gun violence” as late as yesterday, his primary concern was that Muslims would be unfairly targeted.

(Investors Business Daily) While speaking to Muslims last week, Homeland Security chief Jeh Johnson revealed why he’s so protective of them. He compared growing suspicions cast on them to the plight of his communist kin.

Johnson dropped the bombshell that his grandfather had been investigated for communism and un-American activities. We can’t say we’re surprised. Add him to the parade of Red diaper babies in the Cabinet, including top White House advisor Valerie Jarrett, former political advisor David Axelrod and President Obama himself.

No wonder this administration isn’t interested in monitoring radical Muslims for terrorist connections.

“In 1949, during the McCarthy era, my own grandfather was called upon to testify before the House Un-American Activities Committee, to deny he was a member of the Communist Party and defend the patriotism of African-Americans,” Johnson said in a speech to the ADAMS Center in Sterling, Va., a mosque founded by alleged radical Muslim Brotherhood leaders.

“Today his grandson is responsible for the homeland security of this entire nation,” he boasted.

He likened the current climate of “fear, suspicions and prejudice” against Muslim immigrants to the Red scare and McCarthyism his grandfather, Charles S. Johnson, lived under in the 1940s and 1950s.

In 1949, Johnson, a sociologist and president of predominantly black Fisk University, was dragged before the House Un-American Activities Committee and “asked to deny if he is or ever has been a member of the Communist Party.”

The panel had good cause to investigate. Communists hadn’t just infiltrated Fisk as professors, but Johnson had readily hired them, including Giovanni “Ross” Lomanitz, a known communist operative.

Even after Lomanitz’s communist loyalties were exposed, Johnson spoke out on his behalf. Johnson then hired and defended yet another communist, math professor Lee Lorch. Johnson initially refused to fire him, but relented under withering criticism.

There was also the issue of Johnson’s own membership in communist fronts such as the National Sharecroppers Fund.

Johnson denied the charges and called the hearings a “witch hunt.” But the charges stuck. After he died of a massive heart attack, grandson Jeh Charles Johnson took his name.

Make of all this what you will.