Grind the Week Out 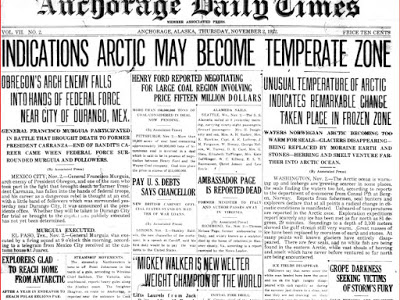 And neither is global cooling. The Earth has been much warmer and the Earth has been much cooler, all before man set foot on the planet.
The attached newspaper from 1922 declares that the threat of global warming and arctic melting is very real. Who am I to dispute the Anchorage Daily Times? (H/T John D)
If the Arctic became a temperate zone back in 1922, no tax would have been necessary to melt the ice today. Or to keep the ice from melting (as you please). Was it a hoax then, or is it a hoax now? Or does the climate vary every year without a lot of help from mankind, or womynkind, or whatever?

Barack Obama got along well enough with Hugo Chavez, architect of Venezuela’s turn to socialism. You’ll note that Maduro, the current ex-president of Venezuela is present in the background. 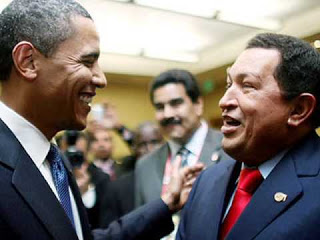 Then again, Barack got on well with the Castro Family as well. They had a great deal in common. Obama’s grandparents and his mother were both communists, as was his ‘Uncle’ Frank Marshall Davis (his mother’s love interest). Isn’t it interesting how the corrupt, lying, smug, sly, mainstream media dodged all of that for eight years?
Hillary would have left Venezuela alone to their communist devices if there had been money in it for her, but, alas, she never ascended to the presidency as she intended. So we will never really know. Then again, she’s running for the presidency a third time. Hillary will need some sort of trick slogan and “Make America into Venezuela” won’t work because they’re on the road to capitalism. One day soon, Venezuelan currency will be worth more than toilet paper. Donald J. Trump replaced the feckless, loser, Obama — and Hugo is in hell, so there IS justice.
Embracing Victims 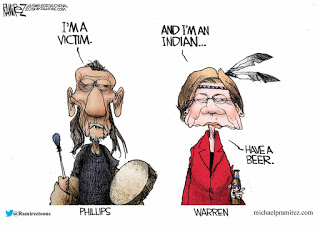 I don’t think that anybody is a bigger victim than Elizabeth (poke-a-haunt-us) Warren D-MA. She ticks off all of the boxes. Broke, female, Indian, and presidential hopeful.

Ok, I understand Ted Kennedy. He was the dim bulb in the Kennedy family but he was still a Kennedy and Massachusetts loved him for it. He was a legacy bootlegger. I don’t understand their capacity to return Elizabeth Warren to the legislature.

I have kid’s in-laws from Boston – Southy types. I’ve asked them. They don’t understand and they’re Democrats after a fashion. They vote Democrat because the ward bosses tell them to. They’re union people and there is a legacy vote. They didn’t vote for the fake Indian. And they don’t think that Bruce Jenner should be the woman of the year. And they think that Michelle Obama could be man of the year. (They were with Joan Rivers on that – shortly before her untimely death)

The USA eradicated Rubella because of inoculations of children in the 1960’s. Measles was almost like small pox – an unknown thing. Almost until now.

Emergency In All Counties Due To Measles Outbreak

We don’t know who patient zero is, but I’ll wager LSP’s fighting monkey, Mike_C’s concealed carry handgun and John Derva’s 30/40 Krag Jorgensen, and the latest Jim Curtis novel, that it’s an illegal immigrant from Mexico. There are a lot of narcos from Michoacan and Guerrero who live in Washington State. Don’t ask me why but they do. What about smallpox? When is the last time you were inoculated against smallpox? What about bubonic plague? All of those communicable diseases are alive and well in the Third World — those and many more. Legal immigration provides for a logical, systematic way of insuring that those who come here don’t bring unwelcome diseases with them.
Is it racist for me to write this? Oh, I’m sure somebody thinks that it is. I hope that the progs all catch these diseases in series so that they can show us all how you survive diseases such as smallpox and plague with a smile on your face. Or will they hide behind their high walls, and order their guards to shoot any plague victim shuffling up to the gates? Come on, Pelosi, Warren, Hillary and Cortez, embrace leprosy.