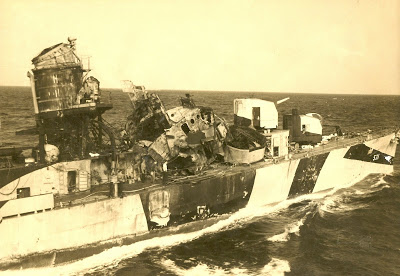 Facebook
Twitter
Pinterest
WhatsApp
On April 29, 1945, my father was a gunner’s mate serving on the USS Hazelwood (DD 531) while it was on radar picket duty off the Island of Okinawa in the Pacific Theater of Operations when it was struck by a kamikazi. 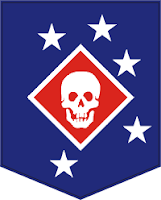 My father joined USS Hazelwood in December 1944 after detached service with the 2nd Marine Corps Raider Battalion, in December 1944. The Raiders were disbanded about a year earlier and following that action he served in a training role until his assignment to the USS Hazelwood.
USS Hazelwood engaged in patrols off Leyte Gulf and gunnery and training exercises out of Ulithi during December. She then joined Vice Admiral McCain’s fast carrier strike force and sailed 30 December. Carrying the war home to the enemy, the carriers launched heavy air raids against Japanese positions in the Ryukyu Islands, Taiwan, Okinawa, and along the China coast 3–7 January 1945. These devastating strikes also diverted Japanese attention from the Philippines, where landings were made at Lingayen Gulf 9 January. After further strikes on Japanese positions in Indochina, the hard-hitting force returned to Ulithi 26 January.
Joining another fast and mobile carrier task force, USS Hazelwood sortied 11 February to protect carriers as they launched heavy air strikes against the Japanese home islands 16 and 17 February. Swiftly shifting positions as only sea based power can, the fleet then sped south to provide support for the landings on Iwo Jima, begun 19 February. Although under constant attack from kamikazes as well as fighters and dive-bombers, Hazelwood came through the invasion untouched and on the night of 25 February sank two small enemy freighters with her guns.
Returning to Ulithi 1 March, the battle-tried destroyer sailed again for action 14 March with a fast carrier force to provide air cover and shore bombardment for the invasion of Okinawa, last step before invasion of the Japanese home islands. After the invasion 1 April, Hazelwood operated off Okinawa on radar picket and escort patrols through intense Japanese air attacks. On 29 April, the carrier group she was shepherding was attacked by kamikazes who dove out of low cloud cover. 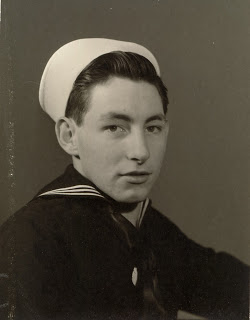 Hazelwood, all guns blazing, maneuvered to avoid two of the Zeros. A third screamed out of the clouds from astern. Although hit by Hazelwood’s fire, the enemy plane careened past the superstructure. It hit #2 stack on the port side, smashed into the bridge, and exploded. Flaming gasoline spilled over the decks and bulkheads as the mast toppled and the forward guns were put out of action. Ten officers and 67 men were killed, including the Commanding Officer, Cmdr. V. P. Douw, and 36 were missing. Hazelwood’s engineering officer, Lt. (j.g.) C. M. Locke, took command and directed her crew in fighting the damage and aiding wounded.
My father, GMG2 Jack R. Lambert, USN (left), suffered from a wound sustained during the attack but more profound to him in his later years was the loss of life, which he recalled with great pain. Not all wounds are visible. Not all show themselves immediately.
Most young men want to grow up to be like their fathers. His service with the Marine Corps Raiders, going ashore on hostile coastlines in combat rubber raiding craft inspired me. However, it wasn’t the danger and life threatening situations he faced with the Marines of Carlson’s Raiders that stayed with him. It was the immediate and grizzly loss of life on the USS Hazelwood.
Here’s to you, Dad. On Memorial Day!