Going to the Olympics? 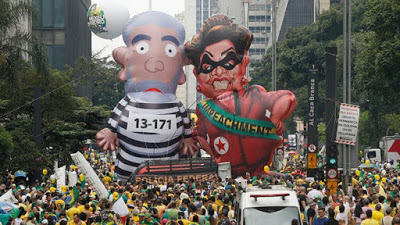 Facebook
Twitter
Pinterest
WhatsApp
The Summer Olympic games begin in Brazil on Friday, August 5 and they end on Sunday, August 21. It will be interesting to see what happens in between those dates, and how it impacts those who will be attending
Yesterday, supporters of President Dilma Rousseff set up burning barricades and blocked roads across the country to protest the Congressional impeachment process. The roadblocks caused widespread disruption in all Brazilian states.
Protesters blocked the main access roads to Sao Paulo, causing huge traffic jams during the morning rush-hour. Police said there were barricades on 14 highways in Brazil’s 26 states and the Federal District of Brasilia.
In Rio de Janeiro, (which will host the Olympics) in August and September, protesters set up barricades at a major road linking the city to the state of Sao Paulo. In the north-eastern city of Natal, buses did not run in the morning and the road next to the main university was blocked. Classes were suspended.
The Senate is due to vote on the impeachment today (May 11). A simple majority in favor of a full trial will suspend President Rousseff for up to 180 days. Her government has asked the Supreme Court to suspend the impeachment process for alleged irregularities
These are the first serious street demonstrations reported since the impeachment process began. There are no indications that the protests are uncontrollable, but they add to the political instability, economic uncertainty and the atmosphere of crime.
(CNN) Brazilian soccer star Rivaldo wrote on Instagram, “Things are getting uglier here every day. I advise everyone with plans to visit Brazil for the Olympics in Rio — to stay home. You’ll be putting your life at risk here. This is without even speaking about the state of public hospitals and all the Brazilian political mess. Only God can change the situation in our Brazil.”