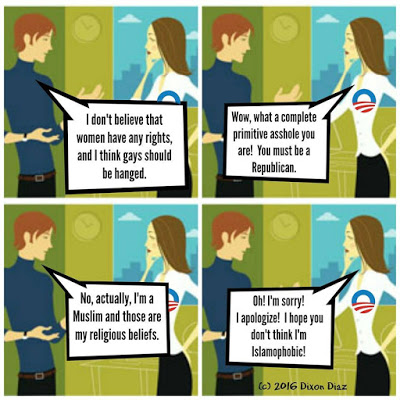 Sometimes the irony surrounding the unqualified support for hard core Islam by the progressive left makes even me cringe. When you look at how they treat women and homosexual people in the Muslim paradises of Saudi Arabia and Iran, you’d think that the progressives would side with Trump. However that’s not the case, is it?
The Rope Tightens 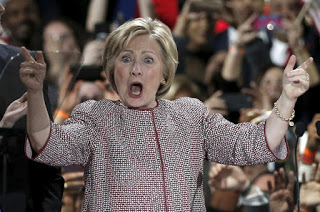 It’s almost always like this in big criminal cases and there has never been one as big as the one against Hillary Clinton – because of the political implications both to Clinton, the Democrat Party and to the nation (are we a nation of laws or not?).  It’s the death of a thousand cuts at the moment.
The cackling crone lost the second state in a row to a 74 year old curmudgeonly socialist in West Virginia last night. This is supposed to be the part of the primary where Hillary is taking a victory lap with her two hundred fifty super delegates who insure a lock for her anointment to become the Democrat nominee for president. However that’s not how it’s working out.
It’s not much of a surprise after she bragged and laughed about putting those coal miners out of work once and for all. In a state that has seen over 100,000 jobs lost since Barack took office due to EPA regulations – having Hillary (promising Obama’s third term) joke about it must not have sat well with the people in West Virginia.
There is a real chance that Hillary will lose California. When she shows up to hold a rally in the Golden State there are more protesters against her than there are against Trump. The Democrat’s Convention should be fun to watch. Don’t microwave your popcorn. Pop it the old fashioned way. It tastes better.
I’m sure that the Clinton Campaign mandarins are in free fall after the latest  Q poll showed that she was tied with Trump in Florida, Pennsylvania and Ohio.  Somebody did a poll who showed that roughly half of the Sanders supporters would vote for Trump instead of the Bitch of Benghazi. It’s a strange election year.