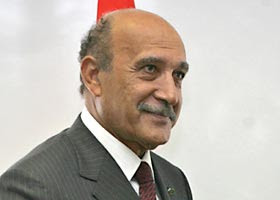 Do you recognize
this man?
Omar Suleiman, the director of Egypt’s general intelligence service and a possible successor to Egyptian President Hosni Mubarak, has been named the most powerful intelligence chief in the Middle East by Foreign Policy Magazine.
The information below is excerpted from [Klieger/MediaLine/2July2009] I’d like you to pay special attention to the attention paid to the ordinary “blogger” in the article. We wonder if people pay attention to blogs or if people read them. I suggest to you that they do. The article was brought to my attention in a newsletter published by the Association of Retired Intelligence Officers, which is distributed to retired US intelligence officers worldwide.
_________________
It is widely believed the president is grooming his son, Gamal Mubarak, to succeed him, but Suleiman is very popular and may have the backing of factions within the military. Some Egyptian analysts see his popularity as a staged buffer to help Gamal succeed his father in a smooth transition, while others see him as one of various powerful contenders for the presidency.
Dalia Ziada, an Egyptian liberal activist and blogger, said that were Suleiman to run in the next presidential election she did not believe he would have a good chance of winning. Ziada predicted the Egyptian government would use Suleiman as a mediator, putting him in power straight after Mubarak so that it will not look as though Mubarak were passing on the throne to his son.
Suleiman’s apparent popularity was highlighted in a recent survey Ziada carried out independently on her blog, in which she asked participants to rank their choice for the next president. In the first phase of the survey, she provided the participants with six candidates, and asked that they propose other candidates if they were not satisfied with the selection. Many wrote back asking her to add Suleiman into the mix, she said. In the second phase of the survey, however, Suleiman only garnered four percent of the 3,000 votes received. Ziada argued that Suleiman’s popularity was to a large degree confined and would not lead him to presidency.
Suleiman, 74, became director of the country’s intelligence service in 1993 after an extensive military career, and is said to be one of a very small circle of people in whom Mubarak trusts. Suleiman has helped Mubarak clamp down on Islamist opponents and the intelligence chief’s combating of Islamist terrorists increased his standing in the eyes of Western intelligence services after 9/11.
The Foreign Policy Magazine report, authored by U.S. Department of Defense employee Patrick Devenny, places Suleiman at the head of a list of five other “spooks” who include Israel’s Mossad Chief Meir Dagan, head of the Iranian Quds Force Qassem Suleimani, the Syrian military’s deputy chief of staff Assef Shawkat and Saudi Prince Muqrin Bin ‘Abd Al-‘Aziz, the director general of the Kingdom’s General Intelligence Presidency.
Do you care?