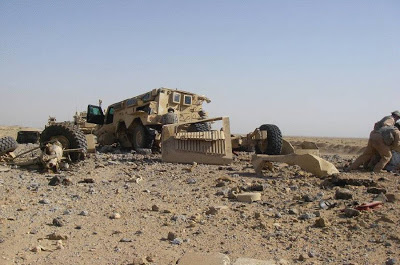 Facebook
Twitter
Pinterest
WhatsApp
If the US Army’s Cougar MRAP is a wolf, the US Department of Homeland Security’s Navistar is more like your family pet dog.
The US Army is phasing out their Cougar 6×6 Mine Resistant Ambush Protected (MRAP) vehicle – and they’re being transferred to the US Marine Corps.
While the Cougar MRAP is far more survivable than the venerable HUMVEE, as you can see below, they don’t hold up all that well against a roadside bomb. I suspect that is why they’re going to the US Marine Corps. The Marines have a history of inheriting equipment from the Army. (LINK – Download a brochure) 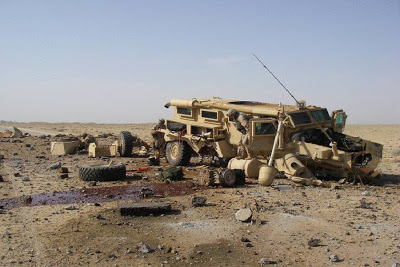 The US Department of Homeland Security has a far less capable MRAP as seen below. They currently have sixteen of these urban assault vehicles (not 2,700 as has been reported). (LINK – View a brochure) 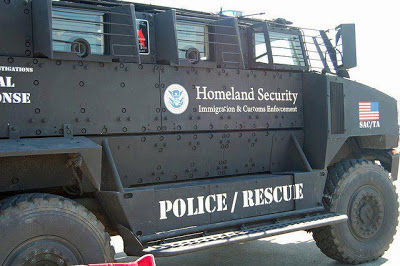 MRAP vehicles are good in urban environments or in many desert environments, but they are so very heavy that they bog down easily in mud or in wet/forest environments. As with any piece of equipment, they have advantages and weaknesses. The weight of metal that protects them also acts against them in some situations, bogging them down. Neither can they operate in high urban threat environments where their opposition is armed with rocket propelled grenades (RPG-7) or other armor-defeating munitions, unless dismounted infantry moves through they area before they do and clears it of insurgents.
In most law enforcement situations, (zombie war scenario) where their opponents are untrained and/or lightly armed, the Navistar and Cougar MRAP’s are fine – and they do represent a less mobile but far better protected choice than a Humvee.
HUMVEE ADVANTAGE vs Navistar
The Humvee handles much better on icy or slick roads, on muddy roads and on terrain that is difficult to negotiate (rocky, steep, etc). The Homeland Security Navistar MRAP is designed to move along America’s paved roads and flat graded roads. The Humvee can cross rural bridges that the Navistar would collapse because of its weight (and end in the river). Escape from a Navistar that ended up on the bottom of a river would be difficult as people struggle to exit through the very narrow back door. And ten guys would be fighting to get through that door as water pours in. The Navistar’s weakest point is its roof, which is less heavily armored that the flanks or the bottom. They don’t expect anyone to throw an IED, drenched in adhesives, onto the roof or to have somebody sink an RPG into them from above (tall building or a mountain terrain environment).
In SUMMARY