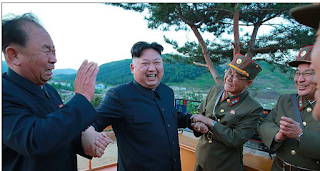 Facebook
Twitter
Pinterest
WhatsApp
Quote of the Day: “The mystery of human existence lies not in just staying alive, but in finding something to live for.”- Fyodor Dostoevsky
North Korea

There have been various reports (none of them particularly credible) that suggest North Korea will soon test another nuclear weapon. My reaction to that is – maybe – but unlikely. The Chinese threat of serious repercussions to that sort of thing is still fresh in the mind of the fat kid with the bad haircut who runs the place, Respected Dear Leader, pictured right.
Qatar, etc.
Iran is mounting a feeble public relations campaign in support of their ally, Qatar. The text runs something like this: Saudi Arabia has promoted Islamic faith centers around the world that have also been the breeding ground of terrorism.
Iran’s point is that it’s hypocritical of the Saudis to sanction Qatar for spending billions supporting terrorist organizations.

The Saudi-Qatar situation has something to do with stopping the Qatari support for terrorists, but it also has to do with Qatar’s friendly relations with Iran. As is always the case, everywhere, this sort of brinksmanship is complicated. It’s also polarizing as some Arab nations have been shipping food to Qatar in defiance of the Saudi mandate.
Some analysts have suggested that the sanctions imposed by the Saudis haven’t worked, however, the point is to replace the emir with somebody more “qualified” from within the royal family, not to destroy Qatar.
China-Pakistan Economic Corridor (CPEC)

The Chinese are demanding more security for the roadway, and that Pakistan provide specific security for every Chinese person living and working in Pakistan.
Sindh Province will provide a 2,600-strong police protection unit. Khyber-Pakhtunkhwa will commit 4,200 police officers and Baluchistan will complete a review of current protections.
The murders in Quetta of two Chinese language teachers by Islamic State terrorists, which they announced on 8 June, is the impetus for the provincial governments to get serious about security for CPEC workers.
The forces listed above are in addition to the newly raised special security division in the Pakistan Army, whose mission is CPEC security, and the new air-sea patrol unit in the Navy, whose mission is security of Gwadar port. Up to 85,000 national and local security personnel are expected to be committed to maintaining security for CPEC.
CPEC is a mixed blessing for Pakistan. Security for Chinese workers and interests already are taking on higher or more urgent priority than Pakistani requirements.
In 2018, Chinese trucks are expected to begin more intensive use of the roads from Xinjiang in western China to Gwadar port. Pakistan is shouldering significant, unanticipated security expenses, but has yet to experience the economic benefits of CPEC.

In time China will be providing oversight of all security arrangements for CPEC, as Pakistani security ineptitude persists and as China takes control of more of Pakistan’s economy along the CPEC right of way. The published plans for CPEC include construction and operation of agro-industrial industries and of Chinese security systems and communications along the highways used by Chinese trucks, among other compromises of Pakistan’s sovereignty.