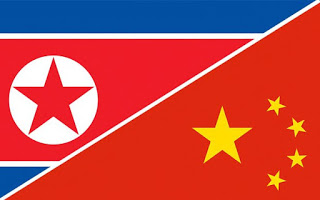 North Korea is essentially a hemorrhoid to China, and there is no indication that they are genuine in their interests to reign in their stepchild. It’s too bad, because they’ll cross a line and it will become an American problem. And that problem may go nuclear. When that happens, it will be China’s fault, but blame will rest (as it inevitably does) on the US.
On 14 June, the Korean Central News Agency (KCNA) published a(nother) lengthy rant against the US. The final few paragraphs may have interest to y’all.

“…We have now resolutely grasped nuclear weapons. Our Republic is a nuclear power in the East that nothing can repudiate.”
“We have definitely acquired our own style of technology for the development of the ballistic rockets that can carry nuclear warheads up to not only the US military bases in the Pacific theater of operations, but also the US mainland. Our country is demonstrating its majestic appearance in a dignified manner as a leading rocket state in Asia.”
“The distance to New York in the northeast of the United States, next to the Atlantic Ocean, from our country, across the Pacific Ocean and the middle of the US mainland, is approximately 10,400 km. Today, to us, such a distance is not very far off. All areas of the United States, even if they are further away, are all within the range of our strikes.”
“The United States is trembling with fear lest this fact be proved in reality. This is because the moment we launch an intercontinental ballistic rocket that can carry out precision strikes on any part of the US mainland, the United States’ hostile policy toward the Democratic People’s Republic of Korea (DPRK), which is for nuclear threat and blackmail and for the provocation of a war, will come to an end.”
“Early this year, Trump blew the snobbish bugle (sic) that North Korea’s nuclear weapons development to reach the United States would never reach a final stage.”
“However, the strategic weapons tests we have recently conducted have clearly showed that the day is by no means far off when chuch’e Korea will carry out the test launch of an intercontinental ballistic rocket.”
“In general, an intercontinental ballistic rocket leaves the atmosphere by the use of a multi-stage rocket and by inertial guidance and reaches outer space 1,000-3,000 km above and then flies along an elliptical orbit with the center of the Earth’s gravity as a focal point, and then hits the target. In this case, the rocket is guided by a control device only during the first segment of its trajectory and, for the rest, freely flies along the mechanically calculated trajectory. When the warhead reenters the atmosphere, it does not burn because of its heat shield and can then hit the target correctly.”
“Our “Hwaso’ng-12”-type surface-to-surface medium long-range strategic ballistic rocket test launched on 14 May flew upward to reach a maximum peak altitude of 2,111.5 km along its planned flight trajectory. This shows that we have creatively resolved the high-thrust engine issue — a pivotal issue in developing an intercontinental ballistic rocket that must fly high up to outer space.”
“At the same time, the “Hwaso’ng-12”-type accurately hit the target maritime zone set in international waters after flying 787 km. This showed that we have completely and flawlessly acquired the atmosphere reentry technology — which is known as the core technology in intercontinental ballistic rocket development — in other words, the heat shield technology that protects the warhead in the severe reentry environment to the atmosphere from outer space.”
“US Department of Defense officials, too, testified that our new-type medium long-range strategic ballistic rocket, after the test launch, reentered the atmosphere in a controlled state and did not burn at all during the reentry course.”
“When we succeeded in the test-firing of a “Pukku’kso’ng-2”-type surface-to-surface medium long-range strategic ballistic missile, too, the hostile forces, showing photographs of the Earth taken in real time by the camera we installed at the warhead, confessed that we had demonstrated competence in atmosphere reentry technology…”
“Justice is on our side. This fact is clearly proved by the history of the construction of a chuch’e nuclear power — the history during which we have etched only victories and glories even in the midst of all sorts of hardships.”
“Our army and people will continue to even more persistently fight toward the day on which we will call a checkmate of final victory in the anti-US war of confrontation that has persisted century after century and decade after decade.”

This is the latest in a long series of rants in which North Korean propagandists present arguments for the US to recognize North Korea as a nuclear-armed state. North Korea craves this recognition earnestly and often.
The scientists and the engineers have learned a lot and have steadily improved the missile and the nuclear programs. However, US recognition of North Korea’s status as a nuclear-armed power is not a matter of science so much as a matter of politics. They want US recognition so badly they won’t get it.
As for ballistic missiles, in the absence of an Inter-Continental Ballistic Missile test, the propagandists published technical information about North Korea’s knowledge of ICBM mechanics.
Much of that information is readily available on the worldwide web, but in this rant technical information is included to persuade the US that the North has authentic rocket scientists and is serious about targeting mainland US cities, including New York.
If the technical information is accurate, it is impressive that one of their missiles reached a peak altitude of more than 2,000kms and still splashed down in the Sea of Japan.
They will test launch a ballistic missile. The rant hints that they already tested the first stage and the reentry vehicle in the Hwasong-12 flight on 14 May. 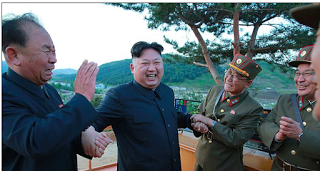 The North’s propagandists and communist ideologues in general consider warfare a form of politics. In that doctrine, politics is the ultimate arena of struggle between systems. North Korean leaders warned the US in this rant that when they launch an ICBM they will have won the political struggle against the US.
Thereafter, the US is supposed to acknowledge defeat and to end its policy of hostility, meaning withdraw its soldiers from South Korea and stop military exercises. Most senior North Korean leaders know this is a nonsense, zero-sum argument that no one takes seriously, excepting some of them and probably Kim Jong Un.
The tragedy of North Korea is that the inept leadership of three generations of well-fed and pampered Kims is responsible for the hardships that the North Korean people have had to bear.