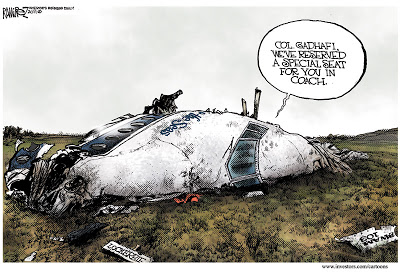 Facebook
Twitter
Pinterest
WhatsApp
I don’t know whether or not Moammar Gadhafi’s days as dictator of Libya will be cut short by his repressed masses who are smelling freedom on the other side of that line of soldiers with bayonets or not. President Obama (closet Muslim) reached out a hand of friendship to Gadhafi, murderer of his own and of our own. I never thought that I’d see the day when a US President could stoop so low — but it was early in his presidency and he bowed to just about every dictator and thug/strongman despot on the planet. 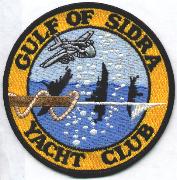 I REMEMBER LOCKERBIE and President Reagan did his best to send a message to Gadhafi. It’s history now but the war was short and one-sided. When it ended the dictator retired to his tent and the terror ended. We failed to achieve regime change (nobody’s perfect), but we tried.
Fast forward to 2011 and the people themselves have taken to the streets to do what the President Reagan tried to help them do. Col. Gadhafi (dictator-for-life) responded by ordering aircraft to strafe demonstrators and to have the Libyan navy shell coastal areas where the people were demonstrating. 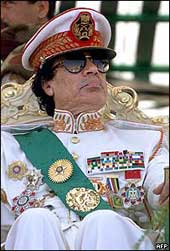 One Libyan naval vessel has reportedly mutinied and is in the waters off Malta. It’s officers and crew found it repugnant to turn cannons on their fellow Libyans – dictator’s orders or not. Gadhafi has ordered anyone who fails to fire on unarmed demonstrators to be executed.
Some cynics believe that Gadhafi is actually Michael Jackson, citing their general physical similarities, they both “like” boys and the disturbing coincidence that nobody ever saw Jacko and Gadhafi at the same party. One is/was the King of Pop and the other, King of Libya.
SecState Hillary Clinton sent a message to Gadhafi urging restraint in his treatment of his rioting citizens. Obviously the dictator-for-life is not a Clinton fan because he’s ignored her ‘strongly worded entreaty‘.
Gadhafi, leader of a terrorist state, needs to be toppled by his own people, but the US needs to offer full and financial support of the “next regime” until they get on their feet and are able to spend their oil trillions. We need to offer our full faith and advice in any matter they may need help on. However since Obama bowed to the dictator, he’s unlikely to take the bow back… Obama, a socialist, is unlikely to support any new Libyan regime that shows signs of democracy and unbridled capitalism.
We simply witness yet another outrage in this Age of the ObamaNation.