I often suggest on this blog that President Barack Hussein Obama consistently works against the best interests of Americans. I have consistently preached here on Virtual Mirage that America’s largest looming concern was our dependence on foreign oil. Imagine an America where our foreign policy decisions weren’t guided in large measure by considerations placed on it by foreign oil suppliers.
George Bush (remember him?) lifted the ban on domestic drilling and it sent domestic crude prices downward. Barack Obama in his orgy of hope and change blocked domestic drilling. The very first thing that Interior Secretary Ken Salazar did was to cancel leases for energy exploration.
There is oil in the US. The Arctic National Wildlife Refuge (ANWR) in Alaska has an estimated 16 billion barrels of recoverable crude and the Green River Formation (Utah, Wyoming & Colorado) have an estimated 800 million barrels of recoverable crude oil. The Congressional Research Service reported in 2009 that the US has a recoverable supply of oil  in excess of 160 billion barrels. (equal to 75 years of OPEC oil imports). One would hope that in 75 years we will find an alternative to petroleum as our primary energy source…but who knows? 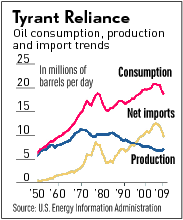 Yes, I know that Al Gore opposes oil exploration and drilling, but frankly, I don’t care what Gore likes/doesn’t like. It would be nice if we weren’t dependent on oil. I’d be thrilled if we had some sort of real solution to oil, but we don’t.
If we opened ANWR to drilling today, we’d see oil at the pumps by the end of the decade. Other areas in the US are more likely to provide oil to market more quickly. It takes time to get things in place. It’s time to open up oil leases and to get things moving NOW.
I don’t know what’s going to happen in Libya, Egypt, Saudi Arabia and Iran – but do any of you trust the oil supply coming from THERE? Investor’s Business Daily has a good article on the subject HERE.
The Saudis announced that they are pursuing a nuclear power program now that Iran is building a bomb. Russia backs the Iranian program, France supports the Saudis. Both claim to be pursuing peaceful research into energy generation. Kuwait is relying on British support for their peaceful nuclear program. Does any of this make any of you feel that the world’s oil supply is safer? I don’t predict a nuclear war in the Middle East in the near future, but the sad truth is that AMERICA needs to chart a course where our own oil needs are hedged. — and guess what? President Obama opposes that. What a shock!