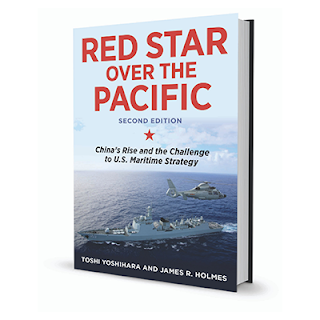 Facebook
Twitter
Pinterest
WhatsApp
Just a note on the Chinese People’s Liberation Army (and the People’s Liberation Army’s Navy) and how they are funded. All Chinese military services including the Chinese Coast Guard, which are essentially pirates, are expected to be self-funded to the extent possible. Some of this blog’s readers know this, but other’s may not and I want to bring you up to speed. The same is true of the Public Security Bureau.
The People’s Liberation Army is expected to be self-sufficient apart from the national budget. It is heavily invested in tourism related industries in China and has vast hotel holdings, interests in national airlines, owns restaurants and whorehouses. The whorehouse business was damaged by President Xi, who has tried to put a stop to “chicken street” – the red light districts in the worker’s paradise. It cut into the Army’s bottom line but was subvented. I don’t know the numbers, just that it happened. If you want to cut PLA weapons development, reduce tourism significantly.
The PLA also is involved in agriculture, growing not only crops to feed its own troops, but in the growing of crops that are precursors (ephedrine) for methamphetamine, in the production of ketamine, MDMA and other narcotics that are sold for cash in the decadent West…
Additionally, they supply the Mexican drug cartels (among others) with firearms and ammunition without any sort of end-user certification or documentation. Keep in mind that it’s cash.

The Chinese Coast Guard (a component of the People’s Liberation Army’s Navy) earns by protecting the fishing fleet (owned by the Navy), which strips the ocean without any restraint, and by seizing foreign fishing ships. The ships are auctioned and the crews are ransomed. This happens every day. The details leak into the press from time to time. (Red Star Over the Pacific, is a good reference book by Naval Institute Press, reviewed earlier this year on Virtual Mirage.)
Stopping currency price manipulation may do more to damage the Chinese military funding mechanism than anything else that we’re presently doing, but their parallel system of funding outside of the national budget is something that you should always be mindful of.
Having moved in circles in China, a lot of this is obvious, but the information doesn’t always make its way into the Western Consciousness outside of military or intelligence circles.