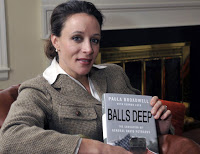 As you may have divined from the title, this is a very serious view of what’s been happening in the area around the Joint Special Operations Command (McDill Air Force Base – Tampa, FL) since the sex scandals broke involving the CIA Director, an FBI special agent who liked sending photos of himself , shirtless, to a shameless sex maven (Jill Kelley) and General Allen, USMC – ISAF, Afghanistan.
While it’s true that snapping necks and cashing checks is pretty much what the Special Operations Community does, there is also the ‘no sky to high, no sea too deep, no muff too tough’ philosophy which can end in sticky, sexually related scandals.

David “Cheech” Robinisi, manager of the Bottoms Up Club on Adamo Drive in Tampa told Fox News that this was a mark of changing consumer attitudes.

“Let’s be honest. Guys have known for 50 or 60 years the girls were lying when they said they were working their way through college. More likely they were working their way through a few ounces of coke with their boyfriends. But now,” he continued, “I mean what the hell, a four star general doing the nasty with his ‘biographer’ gives the whole thing a little class.”

One customer who asked only to be identified as “Dave,” a Chief Petty Officer in the Navy, is a regular at the Chicken Strips club on Dale Mabry Road and appreciated the new legitimacy the term afforded the clubs.

“I used to have to come up with all sorts of things to tell my wife,” Dave said, “Now I just tell her I’m getting together with some friends who are writing the biography of a noted American military figure and BOOM… I’m out of the house for six hours.”

Some of my buddies went out to get to the bottom of it
and bring you the real scoop – which is what you have
come to expect from this blog.

“I used to tell them I was in law school,” said Champagne, a dancer at the Cherry Bomb Club. “But no one believed it. Now, since I’m a ‘biographer’ I get to ask them all sorts of questions about themselves. My tips have actually gone up.”
Liberty Bell, a dancer at Skintastics, agreed. “Before it was such a hassle because we had to act like we cared who these guys were — and at the same time we’re wrestling with a snake or something. Now I just have a pencil and a notebook in my g-string and these guys can’t stop handing me twenties and telling me who their 3rd grade teachers were.”
Tiffany, a “biographer” at the Jet Strip, told our interviewer, “I’ve been doing a lot more outside consulting since I got into the literary business.”
One club owner interviewed was sanguine on the whole matter: “I’ve been at this game a long time. I remember after the whole Monica Lewinsky deal when we all thought we were going to get rich by calling all the girls ‘Interns.’ That didn’t last more than 3 months. This will eventually blow over and then we’ll have to be revert back to calling them social liaisons.”
In a related story, Rolling Stone magazine has announced it wants to give an unbiased view of the entire scandal in its latest critical expose “David Petraeus and John Allen: Mistress Swapping Man-Whores for the Military Industrial Complex.”