For the Love of Bacon (a sermonette) 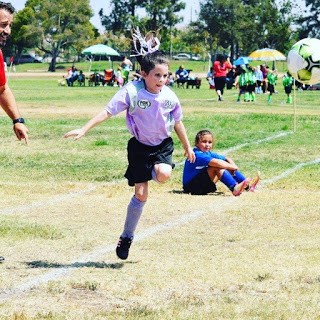 Facebook
Twitter
Pinterest
WhatsApp
I attended a soccer game on Saturday morning where my granddaughter (who lives with me), Alyssa. scored a couple of solid goals. She’s in action there (below right) as a proud member of the Sea Turtles girls soccer team.

I live in SoCal, which means that the population is racially and culturally diverse. For the greater part, everyone gets along remarkably well. Even the Muslims usually leave well enough alone.
After the game, I went to a greasy spoon off State Route 91 that I eat at from time to time because the breakfasts are good. When I went through the door there was an Afro-American, wearing a Mohammedan ‘costume/outfit’ screaming at the Mexican lady behind the counter. I quietly slipped the Kimber from its holster and dropped it to my side, and slipped off the thumb safety.

Notes: (1) The grandkids had gone straight home with my daughter and her husband, so were not there.(2) Round in battery, Hornady .45 ACP +P/185 gr FTX bullet.  https://youtu.be/IetLk5qS88w

I listened. The substance of his rant, laced with ghetto profanity, was that he wanted a “halal” breakfast and they needed to stop cooking bacon and sausage, clean up, scrub the grill and make it for him.

The mood of those eating was hostile toward the Afro-American Muslim. Of those present having breakfast, there were blacks, Mexicans, white folks – working class, and I’m guessing from their reaction that they were almost all “despicable”. The Afro-American focused his anger on the Mexican lady behind the counter and didn’t see the men behind him, most of whom were standing now, waiting to pounce like lions on a gazelle, and explain the concept of ‘frontier justice’.

I asked one of the Mexican cooks, who’d left the kitchen and was standing by, next to me, holding a butcher knife, if he had called the police. He said that they had. The police arrived seconds later and I discretely re-holstered. The senior officer of those who responded was my son-in-law.
He asked, “What’s going on, dad?”
“415 Muslim 5150. Wants them to cook him a special meal.”
The Muslim left in the back of a police car. (charged with CPC 422, Terrorist Threats, CPC 415, Disturbing the Peace, etc.) He was not armed. Just nuts. But it could have ended very differently. Better to be prepared and trained than unprepared and untrained. I have no idea how many of these sorts of incidents happen in the USA every single day, unheralded. I’m guessing that there are quite a few. It’s the first time that it’s happened with me as a witness.

S-I-L requested C-7. I bought. He and I ordered (bacon, eggs, toast, hash-browns) sat down and had breakfast. We got extra bacon on the plates without having to ask for it. The breakfast discussion centered on human lice and the benefits of retroactive birth control.

The greasy spoon is at least six or seven miles from the Mosque-Next-Door that is located near my house.


It takes considerable balls to walk into a place and do that. I wonder what the reaction would be if I brought a pound of bacon to one of their restaurants and demand that it be cooked to my satisfaction. Likely the same reaction that the greasy spoon owners and (despicable) patrons had. But nobody takes bacon to a Muslim restaurant and demands that it be cooked. That’s the difference – and the problem.